I'm sitting here, listening to some really old songs on Spotify and trying to once again explain to my 14-year-old that when I was her age, I couldn't just magically call up any old song ever written and listen to it. We were stuck with the radio and some cassette tapes. And we were HAPPY.

Gen Z'er that Susie is, she just shook her head in disbelief and walked away. I guess I sound the way my mother did when she explained why she and other old folks called the refrigerator an "icebox." Just...really? That's how you kept food cold?

But enough about how I am now a dinosaur, at least in my children's eyes. Let's talk about spending money. There was the new toaster in July, and the new fridge in August, and then? Well, I noticed the pile of kitchen rags I store under the sink was very wet, which led to the fun late-night activity of cleaning out the cabinet under the sink and determining that the water was coming from the faucet. Which, yeah, I guess should have been sort of obvious.

So! I called the plumber and discussed how much it would cost for him to come and fix it, versus just getting a new faucet. And I was sitting there, debating which to do, when I realized, wait, the faucet was already broken.

That's right - I was so used to the fact that it didn't work correctly (I mean, even before the new leak), that I almost paid good money for a plumber to come fix the leak and leave me with a faucet that still wouldn't work right.

If this seems surprising, you're new here, aren't you?

We bought the new faucet. It's super nice, and the sprayer works, and it costs less than the one we put in 10 years ago. Which means we got ripped off 10 years ago, but I'll try not to think about that. Actually, we probably got a little ripped off this time, also, but at least we were ripped off less than last time.

Here, have a doggy picture:

I think he was trying to get my attention.

Susie and I have been very athletic this summer, meaning we've actually gone biking together more than, say, 2 times. We both prefer to bike for food, so now we've worked up to biking 6 whole miles just to visit this great sandwich place a few towns over. I think this is healthy, but I'm not sure.

A few weeks back, I was outside, attempting to assert some control over the weed population in our little townhouse-sized yard. Only, because we live on the end of the row, and our house is set a little further back, it's sort of a big space. It used to be covered by lots of a very attractive ground cover, but for some reason half of it died and there are whole sections taken over by weeds.

"Hey," I said to Larry, "would you mind taking a shovel this weekend and digging up that little area in front of the rhododendron? There's no sense my weeding all that by hand."

So, I came home from yoga that weekend and saw a small section of weeds dug up and no sign of Larry.

"Where's your father?" I asked Susie.

"I don't know," she said, obviously bribed to tell no tales.

An hour or so later, I heard a beep-beep-beep sound and, looking out the window, I observed someone backing up one of those pickups you can rent by the day from Home Depot INTO OUR PARKING SPOT.

People, I just asked him to dig up some weeds. This is what ended up happening: 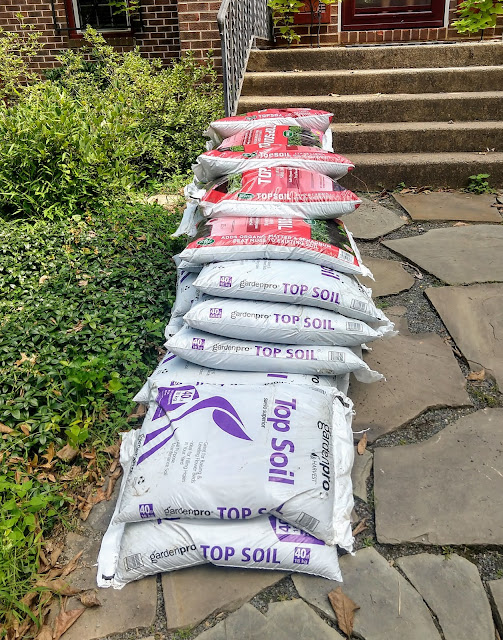 I chose to ignore what was obviously a major construction project. That's right - I didn't even ask.

A few days later, a neighbor said to me, "So Larry's going to dig up the whole yard?"

I think the neighborhood is taking bets on how much longer this marriage lasts.

In other news, I made the mistake of going to the local farmers market last week.


$12 for the bunch - I couldn't resist! We managed to use about half of them for a huge batch of salsa (or pico de gallo, I guess).  It was delicious. I put the rest of the tomatoes in the downstairs fridge for a batch of uncooked tomato sauce later in the week.

Guess what I found today? Hint: It wasn't pretty.

And that's all folks - I just wanted to pop in and say hi and I miss you and OMG working full time is no joke. Also, it was 90 degrees and humid here today, which doesn't quite scream autumnal equinox to me, you know? But Happy Fall anyway, especially to those of you in northern climes where the leaves are changing and the air is brisk and swarms of mosquitoes aren't lying in wait for you when you walk out the door.

As for the rest of us, well, at least we don't need to wear coats with our Halloween costumes, right?