I know there has been a lot going on, what with Georgia tipping the Senate and there being an insurrection at the Capitol and also a presidential inauguration happening, but I have more important things to talk about. Not that we haven't celebrated (the inauguration, that is, not the insurrection):

Still, there are other things going on around here, too. For example, when last we talked, I mentioned that Anna had just left us to return to her real life overseas, but I didn't point out that she left on what was also Larry's and my 30th anniversary.

THIRTY - I used to think that people who had been married 30 years were almost dead. Actually, that's probably what my kids think right now.

Despite our decrepitude, however, Larry and I kept up our anniversary tradition of seeing which one of us would forget our special day. Still traumatized by the fact that Larry didn't even give me a chance a few years ago to prove I had remembered, I laid my plans carefully this time around. Susie helped me pick out a card the day before ("These are awful!" she proclaimed, perusing the CVS anniversary collection), and I waited until Larry fell asleep that evening to run out to the grocery store for a "Happy Anniversary" balloon. Oh, I was clever! He wouldn't even know what hit him.

Only, there's no one available at the grocery store to inflate a specifically chosen balloon at that late hour. Instead, I had to settle for a pre-inflated, generic "Happy Birthday" one. No matter, I thought, I'll fix it at home. 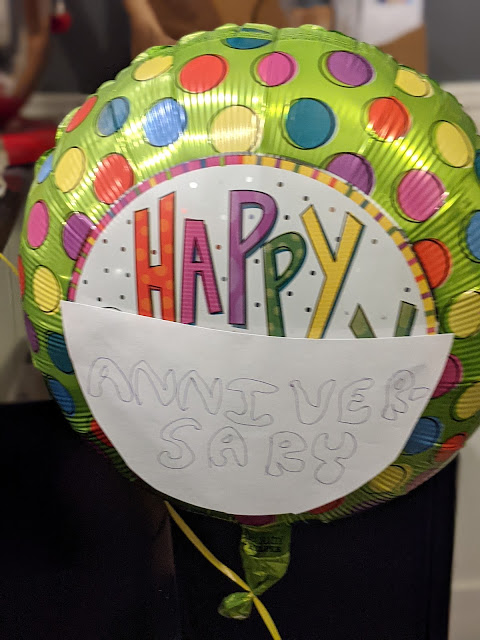 Turns out, I'm not very good at fixing balloons. Still, my plan worked. He discovered his card and balloon and box of chocolate-covered cherries before I was even awake, and then he spent the rest of the day insisting he would have remembered anyway.

I also won a raffle held at my local yarn store on Black Friday: 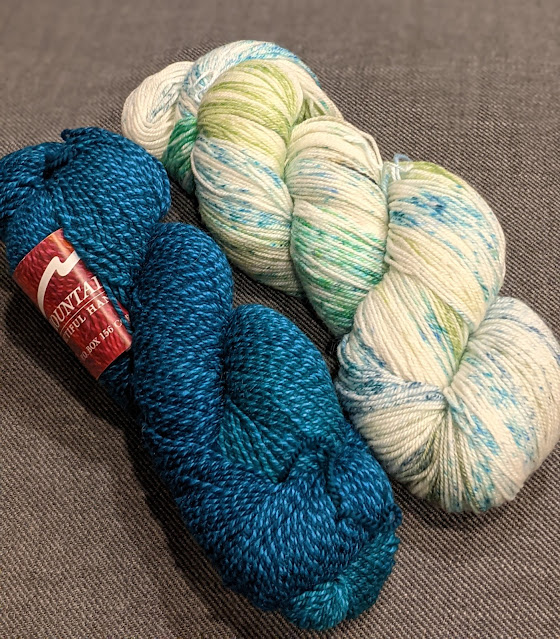 These are being made into a crescent shawl that I knit while I sit and watch White House press briefings, which are my new jam. Facts! Reasonable conversation! The use of the sentence "I don't know, but I'll find out"! I'm a Jen Psaki fangirl, I am.

Unfortunately, I did not win at picking out pickles. I was planning to make potato salad for dinner, and everyone wanted it the way Anna made it, with some chopped dill pickle in it, so I grabbed this...thing...from the Harris Teeter deli and brought it home. THIS WAS A MISTAKE.

Two out of three's not bad, though, right?

Happy New Year! I guess we can all just rip off these masks and go back to life as normal now, right? RIGHT?

Oh, maybe not. Well, then, at least we have all that election stuff behind us, right? No more worrying about ballots or voter turnout or...

Oh, oh yes - Georgia. The fate of the nation turns on Georgia today. And tomorrow...well, never mind. Some day this will all be over. I would totally like to resume ignoring both my health and my government, thank you, like the good American I am.

We had a lovely COVID Christmas, albeit a quiet one. The "kids" (as discussed previously) decided to spend the afternoon building candy houses and, as usual, spared no effort. 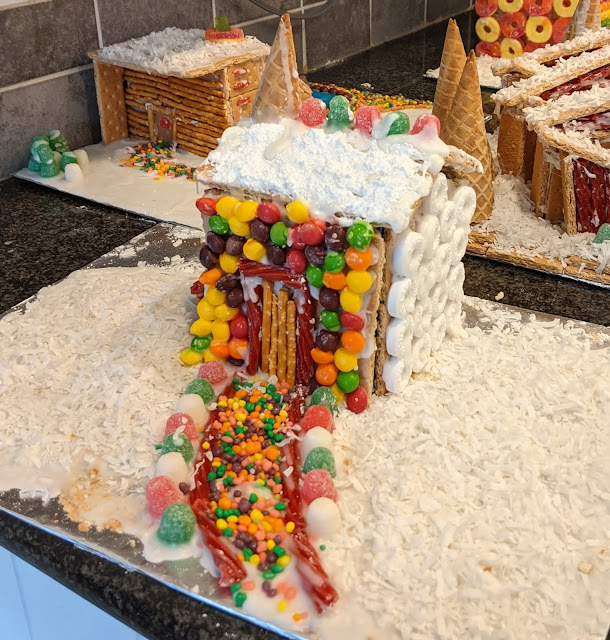 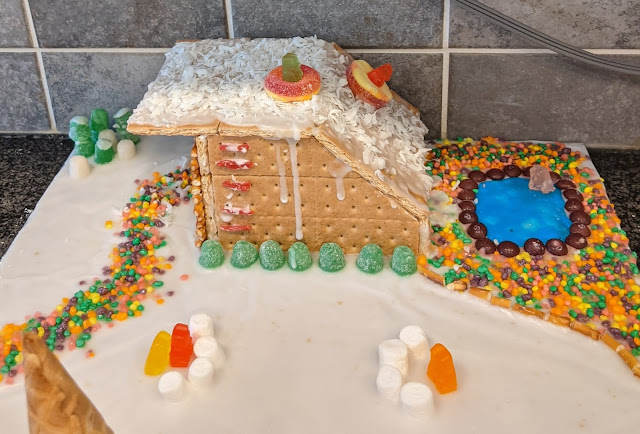 New Year's Eve was similarly quiet. Normally, we spend New Year's Eve cleaning up the house in preparation for our neighborhood's New Year's Day party, an event we have hosted since 2008. This year, however, the party was canceled due to COVID, with the upshot being our house risked remaining a mess until next New Year's.

But Anna did return to Tunisia on Sunday, and Brian decided to move down to the guest bedroom in the basement that she had occupied for the last 9 months, so the result was that everything got a pretty good cleaning out anyway. Brian has definite ideas of what he will and will not live with, so the seashell lamp that Anna used on her desk all year was unceremoniously dumped outside his door. 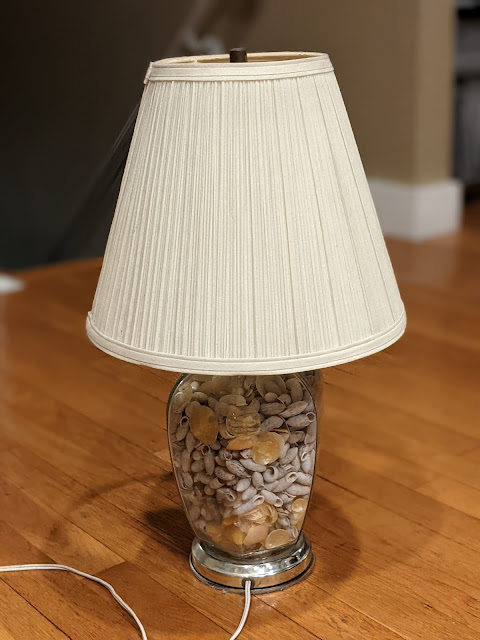 "You don't want this?" I asked Brian.

"Thirteen years ago," he said.

So yeah, it takes me over a decade to realize I don't like a lamp.

Where was I? Oh, yes, Anna left me, and I am bereft. She's the only other one in the family who will actually plan a dinner. It was like she was another grown-up or something. Also, she was just fun to have around. Grown offspring are cool.

On the plus side? With Brian moving downstairs to her room, I HAVE MY OFFICE/YARN ROOM BACK. I don't know who is more excited, me or my long-suffering spouse who has tolerated for almost a year the numerous Rubbermaid bins full of yarn in our bedroom and the tangle of knitting needles hanging up in our closet. He'd also like our nightstands back, which Sarah and I commandeered back in May to build my makeshift desk.

The day Anna left, we took down the tree, packed up all the decorations, put the furniture back in place - you know, all those things you do that make you feel like you have a fresh start to the year, even if this year it is less of a fresh start and more of a retread. Still, we packed things up and realized that most of the items we actually use (aside from the lights) fit into these 2 small bins: 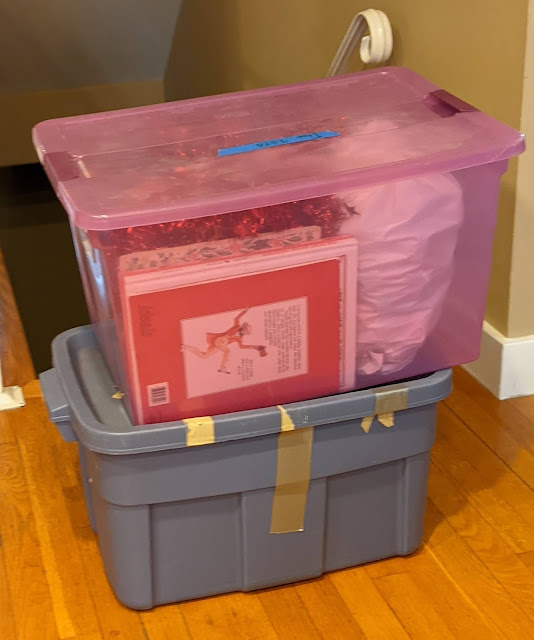 But -- and this just kills me -- we still had this REALLY LARGE bin more than half-filled with boxes containing I know not what: 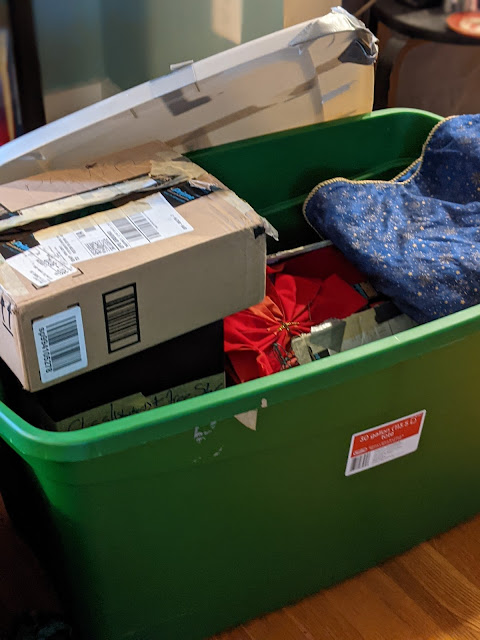 "Let's chuck it," I suggested to Larry, who immediately got the panicked look on his face that appears whenever I suggest chucking anything, ever. You know, that "I might need it" look?

Don't think for even a second that this line of reasoning worked. We're keeping everything, as usual. I just want the kids to know I tried, is all.