Telework's Not All It's Cracked Up To Be

Well! I would have posted last weekend, but Larry has this weird fixation on "doing taxes" and "staying out of jail," so I worked on our 1040 instead. That wasn't fun. Turns out we owe money because what one spouse means when she says (after doing the taxes for 2017), "You should lower the number on our withholding" and what the other spouse hears are apparently two different things.

We're both native English speakers, you know. There's no excuse for this. Yet, here we are.

We had a snow day this week (Look away, Midwesterners! You wouldn't have even recognized it as such), so I actually got to work from home all day instead of going to the office.

Remember? I have a job. Maybe I haven't mentioned it enough...

So I worked from home on Wednesday, and you know what? It wasn't nearly as relaxing and energizing as NOT working from home. Seems that when you're working from home, you can hear the laundry calling you, and you can see what a mess your house is, and people keep talking to you and asking you things, and you can't avoid noticing that strange smell emanating from the refrigerator.

Now, as some of the more astute among you may be aware, I am slated to start working at home within the month. This is a telework position, after all. Oh, sure, they'd let me stay at the office if I really wanted to, but there's this small issue of my having completely abandoned my children for the past 2 months just to get this job (with all my friends valiantly picking up the slack of supplying rides and entertainment and what-have-you). I can't keep doing that.

So, yeah, I'm bracing myself for a major adjustment period. I mean, how DOES one continue blithely ignoring all other responsibilities while working from home? Is that issue addressed in those career women magazines I've never read, because I've been too busy being unemployed? Do those magazines even exist anymore?

Happily, Brian will be home the first week of March (for "Spring" Break, apparently); so I told the tech people at work that I needed the monitors and other equipment by then, so my teen could set them up for me. Which, it turns out, may have been oversharing, because they looked at me strangely...

Look, you have to hook things all TOGETHER. With a special thing that you plug into another thing. Dammit, people, I'm a wordsmith, not a tech wizard.

So, anyway, I have to find a desk to stick in my yarn studio, so Brian has somewhere to set this all up. Larry found a perfectly nice corner desk on CraigsList, but he put that in the guest bedroom in the basement, which I've also dubbed his study, even though he doesn't really ever go in there. Now all that's left on CraigsList is astonishingly ugly. I swear, all the pictures on there look so seedy, as if they were taken in a meth house or a murder scene.

Speaking of my yarn studio (we were speaking of that, right?), I'm a little late for my annual giveaway of the Yarn Harlot's book Knitting Rules. Of course, I don't have THAT many regular readers, so maybe I've given everyone a copy already? If not, throw your name in the hat (well, in the comments, actually) and make sure I have a way to reach you if you win!A 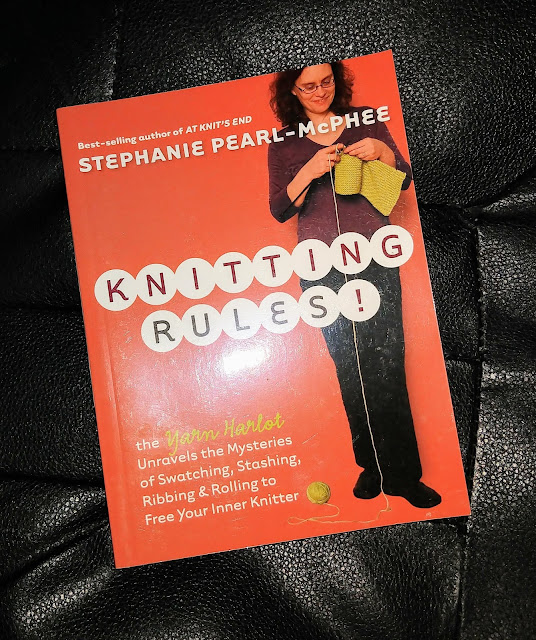 This book (as I've explained before, and also here, and probably a dozen other places) was a life-changer for me, which really, how many books can you say that about? I can't even remember why I picked it up in the first place - maybe I was looking for an instruction book? And, yes, it does have some patterns (or more like recipes, really) for projects, but those are interspersed with all sorts of funny ruminations on the knitting life and the creative process.

It's a fun read, is what I'm saying, and maybe it will change your life, too. Who knows?

Apparently, I post once every two weeks now, whether I have anything to say or not.

Is it possible to feel exhausted and energetic all at the same time? Apparently. I look forward to work each day, I come home tired but feeling very accomplished. Okay it's a little hard to get up at 6:30 every morning, but hey, it's dark out! I bet even Kimmy Schmidt hates getting up in the dark.

The house is sort of falling apart around the edges, and I try to catch up on the weekends, but currently there are two baskets of laundry in my bedroom, waiting to be put away, and a ton of dust under my bed, threatening to choke me in my sleep if I don't start Swiffering. Also, there are approximately 40 dozen winter coats in our hall closet, and there are only 4 people currently living in this house. Why? I know not why, and I don't have time to find out.

We won't talk about the refrigerator, okay? Just...no. Lord knows what's happening in there. We'll just let the CDC sort that out.

All my IRL friends are tired of hearing me talk about how I love having a job, and I don't blame them. So I'll just say it here: I love having a job. It helps that I'm doing something I enjoy, and I get to work with fairly interesting people, and the hours are somewhat flexible. But what I hadn't realized is how, before I was working, my day was filled with unrealistic (for me) expectations: there were a zillion things I didn't get to, and WHY didn't I get to them? AFTER ALL I HAD NOTHING ELSE TO DO.

What I'm saying is, the self-talk was pretty negative, and constant, and I didn't even realize it was there. It was even stealing the joy from my knitting. WHY WASN'T I GETTING MORE DONE? I HAD ALL DAY.

But now, with full-time work? I have a finite number of things expected of me on a day-to-day basis: go to work, come home, play with Susie (she's on a Yahtzee kick), drive/nag Rachel (yes, she still lives here, but with a breathtaking amount of disdain for her housemates, as befits a 16-year-old girl), make sure the fridge has some basic comestibles in it.

That's it. If I do cook dinner, well, it qualifies as an amazing feat. Yay, me! (Whereas, BEFORE, I was SUPPOSED to cook dinner. ALL THE TIME. See the difference?)

Having a job has pared down the number of things expected of me to a manageable number. Who woulda thunk it? I swear, I feel lighter than I have in years.

None of this is ha-ha funny (and I do prefer to make people laugh), but I wanted to write it down here, in case there is anyone else out there who is feeling dragged down but doesn't know why. You might just be suffering from a case of irrational expectations, is what I'm saying. I'll repeat: BEFORE, the self-talk was pretty negative, and constant, and I didn't even realize it was there.


I mean, I (unwittingly) fought past it pretty well. I took care of the house, I took care of the kids, I pretended I didn't mind feeling as though I was always dropping the ball (ALL THE BALLS). But it's tiring, all that fighting. No wonder I feel so much more energized now - it's as if someone took 20 pounds of weight off me.

Now if I could just lose the actual 20 pounds that have attached themselves to me since menopause...but hey, I guess that's why God invented spandex...

Coming up next time: Larry makes me do taxes. Also, my favorite shapewear. I know! Riveting!