People were commenting "Amazing photos!" on my previous post and I was all like "Huh?" I went back and looked and thought, "Wow! I actually saw that stuff!" Which, well, you'd think I would have already realized, but no. Because here's the problem with traveling in the Middle East: there's too much to see.

Seriously. You're walking around and by the time you've viewed your gazillionth stone wall from antiquity in the space of an hour, you're all, "That's nice. But where CAN I get some coffee here?" It's just too overwhelming. You walk up a modern-ish city street and realize that the building you're standing next to is pretty darn historic-looking, and hey - so's the one on the next block! And over here! And pretty soon you've got a camera full of pictures of stone buildings and you have no idea what they all are.

Look, I never said I was good at traveling, okay?

Theo rented a car a few different days and drove us all around. We saw I don't know how many interesting stone villages perched on the sides of mountains. But it was enough that we stopped noticing them. We saw mile upon mile of breathtaking desert hills (I've got the photos to prove it); but, sadly, we got used to those, too. So what stands out is the weird stuff, like the Chinese restaurant menu printed in Hebrew (we ate there in Be'ersheva): 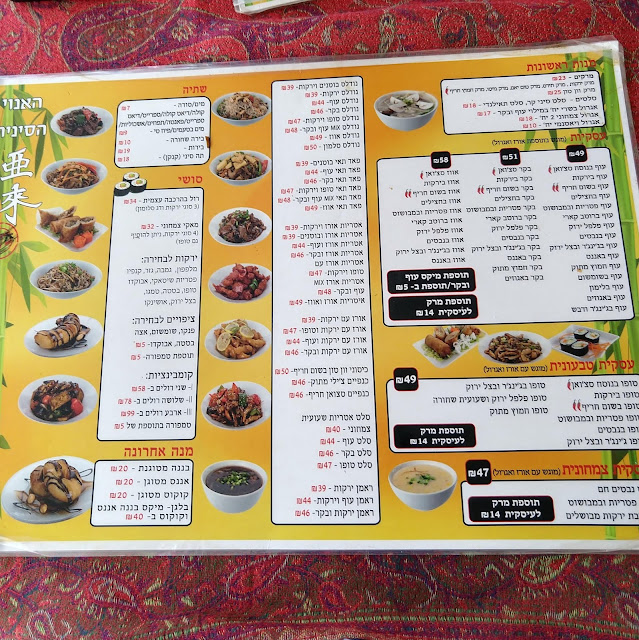 At the Church of the Nativity in Bethlehem, what caught my eye was not the stone manger where the Baby Jesus (supposedly) lay in swaddling clothes or the centuries-old paintings on the walls, but the thoroughly modern vending machine just outside the old stone walls of the building:


Food took on an overarching importance during this trip. Yom Kippur, we inadvertently fasted, because I was trying to act like a savvy traveler by purchasing food at a deli counter in the local souk (market) the day before. That evening, after the sun had gone down and all the stores had closed, Susie and I sat down with great anticipation to our little feast, a variety of salads and pickled vegetables and some bread. "We'll have enough for tomorrow, too!" I announced happily, proud of my ingenuity.


Reader, we hated it. All of it. Nothing tasted right to our American palates. And now we were staring down the barrel of an entire day with NOTHING TO EAT (except for the hostel breakfast, which Susie was becoming sick and tired of). To add insult to injury, 2 youngish guys sat down next to us at this point and pulled out their own dinners: a pint of Ben and Jerry's each, and also a bag of chips.

I repeat, American ice cream and potato chips. People, this was the equivalent of waving a juicy beefsteak in front of a couple of very hungry puppies.

They both enjoyed their repast as Susie and I tried not to stare too longingly in their direction. We were both thinking the same thing: Why hadn't we done that? After all, there was a convenience store right next to the hostel (closed now, of course). But no - I had to be trying to act like Miss World Traveler and shop where the natives shopped.

And that, my friends, is when I gave up trying to impress myself and Susie with how to be a traveler. Because, really, I'm not. Not a good one, anyway. I don't know what half my pictures are of, my stomach was dying for American food halfway through that trip, and watching me try to figure out the Israeli money was enough to erase Susie's last shred of confidence in me.

And, yes, as soon as that convenience store opened the next evening, Susie and I were in there, buying some Ben and Jerry's. It's a good thing to live without pretense, right? Tell me I'm right.
on October 12, 2018