It's a long, holiday-less stretch between President's Day in February and Memorial Day at the end of May! And it seems even longer if you happen to be a person (meaning, uh, me) not used to working a paid job 40 hours a week. I sort of staggered into the homestretch, as it were, on Friday, thinking that maybe I'm not cut out for this sort of thing, after all. But then a friend who has always had a paid full-time job said everyone pretty much feels like that by Memorial Day, so maybe I'm not lazy, just normal.

Oh, these three days have been glorious! Busy, but glorious. Susie (she of the missing arm and the magnificent public tantrums) turned 14 on Saturday, which is nothing short of ridiculous. ABSURD.

Still, no matter how old she gets, she'll always be the baby of the family. Theo walked into the house on Saturday, saw the 2 (count them, TWO) bundt cakes on the counter, and said, "None of us ever got 2 cakes for our birthday!"

Yup. He's right. But the lemon bundt cake Susie made came out smaller than expected, and I had invited some neighbors over, so I made a chocolate bundt cake to go with it, along with a vat of potato salad. Theo played grillmaster and did the chicken and burgers, so that just left me with cutting up the watermelon and cleaning the ENTIRE HOUSE. Larry had the honor of cleaning up the back deck, which he transformed from its standard trailer trash vibe to an aura of suburban respectability in under 2 hours. I was impressed.

Naturally, Susie got some gifts:


And now, for Theo's edification, I'd like to point out that there is a downside to being the youngest child. You may indeed get two cakes, but you also get two (and only two) pictures of your birthday party. Yup, folks, those 2 images are all I have in my possession to document my baby turning 14. And I only realized that fact as I was looking for photos for this blog post. No pictures of her presents, no pictures of her pretty face, no pictures of the chocolate bundt cake or of all the guests that we had over that day. NOTHING.

So you'll have to take my word for it that the party was a success. And we still have food left over, which made the rest of the weekend feel particularly holiday-like. For me, anyway...

The neighbor we invited over is in the middle of moving house, so she held a pottery sale this weekend (she is an excellent potter). But first she let Susie pick out a mug, which is the loveliest thing ever, and I am coveting it: 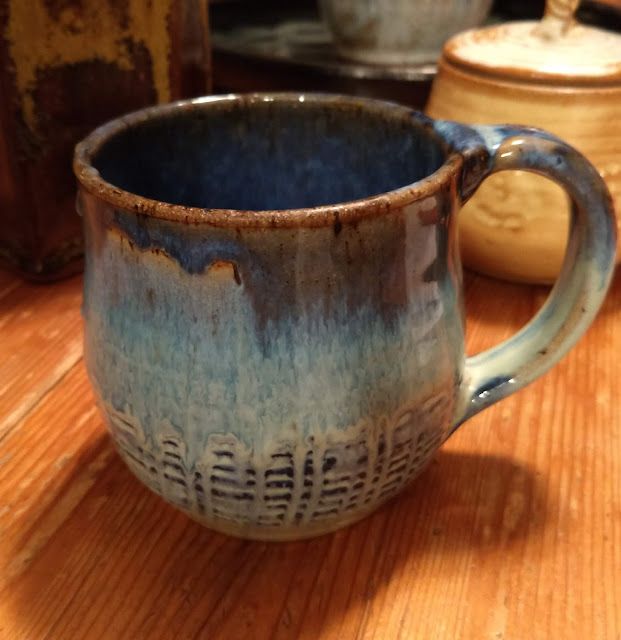 And she gave me the most cunning little sugar bowl she made herself, because Larry (along with a few other neighbors) pretty much risked his life this weekend helping move the heaviest bookcase in the world from their house to the house of another neighbor who wanted it. Seriously, people, it took 4 guys to do it, and even then we weren't sure it wouldn't fall on one of them and kill him.  Neighborliness is an extreme sport around here, I guess.


Larry and I pretty much spent Sunday napping, because apparently we can't handle excitement anymore. Also, the impacted wisdom tooth the dentist told me last January I had to do something about? It finally started acting up (seriously, smack in the middle of the party), so I was sort of doped up on painkillers Sunday. NOT FUN. Between naps, I did manage to go through two drawers of my knitting dresser and get rid of a bunch of stuff, inspired as I was by watching my neighbors try to pack up their home of 30 years.

Wait, did I say inspired? I meant, terrified. TERRIFIED that I was watching a picture of Larry and myself 10 years from now, when we'll be wading through mounds of yarn and knitting paraphernalia and emptying a closet full of camping equipment, with all 6 of our kids asking, "Why do you have all this stuff?"

Our neighbors look pretty tired and overwhelmed, is what I'm saying.

Today we were more energetic, with Larry going kayaking with Theo and me taking Rachel and Susie to the mall so Rachel could pick out eyeglass frames and look for shorts, which believe me are two very time-consuming endeavors. Time-consuming, as in I managed to get 2 miles worth of steps in the mall while the two of them tried on clothes at American Eagle. Rachel was ready to hit a few more stores, but unfortunately she's stuck with an older, doped-up mom with dental problems who just couldn't take anymore, so we went home.

And then I went knitting with my friends, because hey, it's my day off from work. My HOLIDAY day. Which means (and seriously, this just occurred to me) I was paid for all that - the mall, and the walking, and the knitting. Which is sort of cool, you know?