1. You would think, knowing how helpful knitters generally are, that someone, upon reading this post a couple of weeks ago, would have e-mailed me posthaste to warn me that, if I'm switching needles midway through a pair of socks, I might want to recheck my gauge on the new needles. But no, I heard nary a warning; so I've been happily knitting away to make a mate for the perfectly sized sock, the sock of my dreams, that I created on those accursed bamboo needles, enjoying the relative ease with which my new metal DPN's slide through my knitted loops, without even suspecting that I was careening toward a knitting disaster. 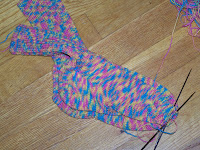 In short, the second sock is appreciably narrower than the first. I could leave it as is; but then every time I would wear it, I would be reminded, by the discomfort in my left foot, that a mistake had been made. Here I was fantasizing that I could become one of those knitters who actually manages to produce more than one item per year. Alas, that was all it was - a fantasy.

2. Last night, after approximately half an hour spent figuring out a)which photos are already in my Snapfish shopping cart, b)which photos have been edited but not placed in my cart, and c)which photos have been both edited and already purchased as prints - after all of that, I determined a devastating fact: I have not, in fact, edited a single photo from 2008. None. I remember editing a lot of photos somewhere in the first part of the year; but those photos were, in fact, from 2007. But only the last 4 months of 2007. I have no idea what is going on with the first 8 months there, either.

3. The trip today to my local library was once again humiliating. I picture them someday just snapping handcuffs on me in front of the children. No, I don't want to talk about it. But, damn, those fines add up fast.

I have to go now, to edit approximately 2800 photos (I am not indulging in hyperbole here) and to pull apart the sock I just about finished tonight. And, no, I didn't get around to calling the doctor, all right? I had a carpool to drive, and a library visit to make, and a sock to finish (sob). Tomorrow, though. There's always tomorrow.

Whew! Now I can't get that song out of my head. Nor the picture of the multiple Dutch Annies. That was too weird, don't you think?
on September 09, 2008