As The Food Turns 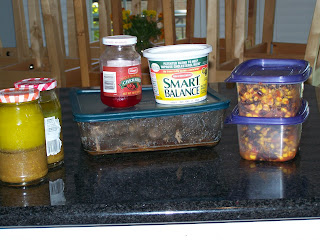 It's Wednesday! Time to clean out the refrigerator and start with a clean plate. I mean, slate. Whatever.

I'm not doing too badly, folks. I've been making my kids eat the leftovers more (not cooking helps to facilitate that), and it shows. Sort of. Still, despite my best efforts, on the right there we have 2 Gladware containers of leftover "enchilala duff." (Named by one of our toddlers, can't remember who...) That's black beans, corn, salsa, canned diced tomatoes, and tomato paste, all thrown together in a crock pot and then dished out in taco shells to a semi-appreciative crowd. These particular leftovers must have gotten lost behind something else; otherwise David would have finished them off in lieu of eating our normally carnivorous fare. They are accompanied in the leftover category by a small amount of pot roast (glass dish) that has passed its "eat by" date. Not too bad, not too bad...

Atop the roast is a jar of maraschino cherries a neighbor found in her cabinet and pawned off on me. (Believe me, when you have 6 kids, everyone brings you their extra food.) I love maraschino cherries, at least when I get one or two on top of a milkshake or ice cream sundae. But a whole jar? Not so much. They start tasting poisonous. What does "maraschino" mean, anyway? "Bad for you"?

Next to the cherries is a full container of margarine. I was about to use it when (luckily) Theo walked into the kitchen and pointed out to me that I had bought the kind he is allergic to. So I put the lid back on and jammed it into my black hole of a refrigerator, thinking I would give it to a neighbor when I had a minute to spare. By the time I rediscovered it, there was a hole burned in the lid by the refrigerator bulb (does this happen to anyone else? Please say yes), so I felt funny about giving it away. I mean, what would I say? "Here, have this margarine. Don't worry about that hole in the lid. I don't think any plastic melted onto the margarine itself. And margarine's sort of fake anyway."

On the left, this week's piece de resistance: 2 jars of salad dressing that I made for our 4th of July BBQ. One of these jars has already been featured twice in this blog - once when I first removed it from the refrigerator, and again when I discovered it on my counter 2 weeks later.

It's the Rasputin of refrigerator discards. It will not die.
on September 03, 2008

Email ThisBlogThis!Share to TwitterShare to FacebookShare to Pinterest
Labels: housekeeping