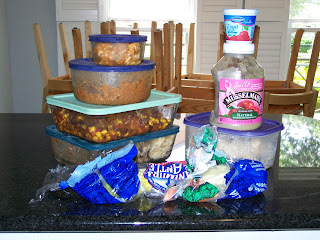 I am devastated. I wrote a witty first paragraph here and discovered, when I went to link something to a previous fridge post, that I had written almost the exact same witticisms 4 months ago.

In other words, I'm all washed up. Next thing you know, I'll be appearing on The Loveboat.

So let's just get on with it, shall we?

Readers will note that I am once again segregating glass and plastics. I don't know why. Old habits die hard, I guess.

Strike that - I've made that joke before, too.

On the left, from bottom to top:
On the right, from top to bottom (just to confuse you further):

Some limp stalks of celery languish in the foreground of this picture, mostly because none of my children understand the command (given in perfectly good English), "Put the celery in the Tupperware celery keeper, dammit." (Yes, I do speak in bold font when talking to my children. Sometimes I speak in italicized bold font, also. Nothing works, though.) The celery (remember? we were talking about celery) is accompanied by a derelict bag of baby carrots (found, of course, in the back of the fridge).

Let me leave you now with the tune that is currently running through my head: 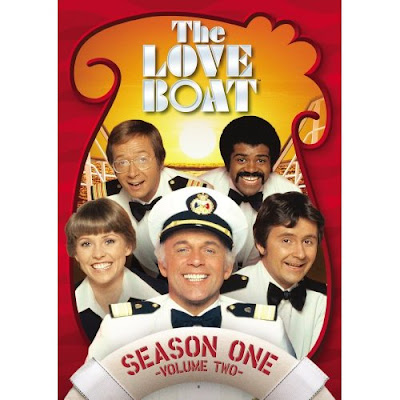 f you who managed to sit through that piece of 70's memorabilia, did you notice that one of the guests was McLean Stevenson? What was up with that? And have I ever mentioned how much I wanted to be Julie? So perky! And pretty! And did I mention perky? As Julie, I could have maybe snagged that cute yeoman (what was his name? Gopher?).

In case you have not yet figured it out, I possessed no semblance of a social life during my teen years. I should ask Larry to give me the DVD set for my birthday (coming up!). I could make Anna stay home some weekend and watch it with me. You know, just so's she can appreciate her relatively fun-filled teenage existence....sort of a Scared Straight for chronically petulant adolescent girls...
on June 18, 2009