If You Can't Take The Zucchini... 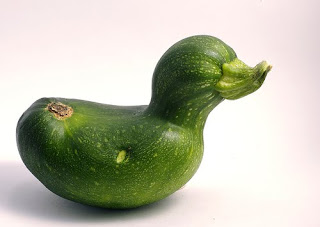 Dinner this evening was its usual hairshirt of an experience, with Brian objecting strenuously to the presence on his plate of sauteed zucchini (which he liked last week) and begging me to let him off the hook.

"Nope," I said, sticking to my guns. You see, those of us who have been moms for a while know that the other children were watching this scene closely. If I excused Brian from zucchini duty tonight, I would have a summer-long vegetable revolt on my hands. "Eat the zucchini or no dessert," I told him, my heart breaking as some of his tears plopped onto his food.

5 minutes later, during which I studiously ignored her zucchini-averse weeping brother, Susie sighed and handed me her empty cup. "Could you give me some more water?" she asked. Gesturing at her own pile of zucchini, she added, "I'm gonna need it to get these down."

Get these down? Sheesh, it's a tough life for a 5-year-old around here, isn't it?