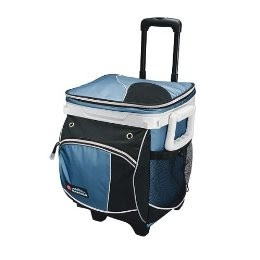 The other day at Target I bought a long-coveted cooler on wheels to use at the pool. For 3 years, I've been looking to find this type of item on sale; and I realized on Friday that, if I weren't so cheap, I could have been enjoying this particular piece of equipment for 3 summers already. So I slapped down my 40 bucks and wheeled it home.

Oh, I was so excited! No more would the children fuss and fight over who had to carry the heavy cooler bag from the car to the pool. No longer would I have to adjudicate over who carried it last, and for how long. Life as I knew it would be simpler, happier, more care-free - all because of this remarkable invention.

I guess you other moms know what happened, right? All the way to the pool, I listened to 3 children argue over who would get to pull the amazingly fun cooler-which-rolls. I endured lengthy discussions over who had gotten to take it from the house to the car, and who had received the honor of pulling it through the entire store on the way to the register. I almost wept along as Brian sobbed that he always had to carry the heavy cooler bag and now he would be stuck with the equally heavy bag of towels if he weren't afforded the privilege of pulling the new cooler.

I don't even remember who won. But my head still hurts from where I was banging it on the steering wheel.
on July 11, 2010