Let's Fast Forward Through The Last Half of 2022!

Well, except for this, actually: 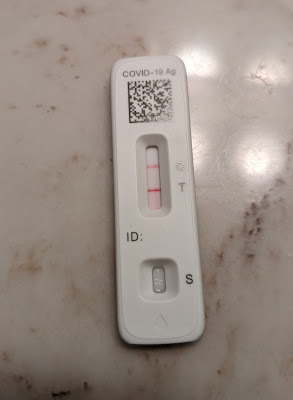 But hey, life isn't perfect. And luckily, Larry got it first, so I was able to spend a few days frantically finishing up gift buying and holiday menu planning before I, too, was felled by this rapidly mutating virus from hell.

God, I'm so sick of talking/thinking about COVID. 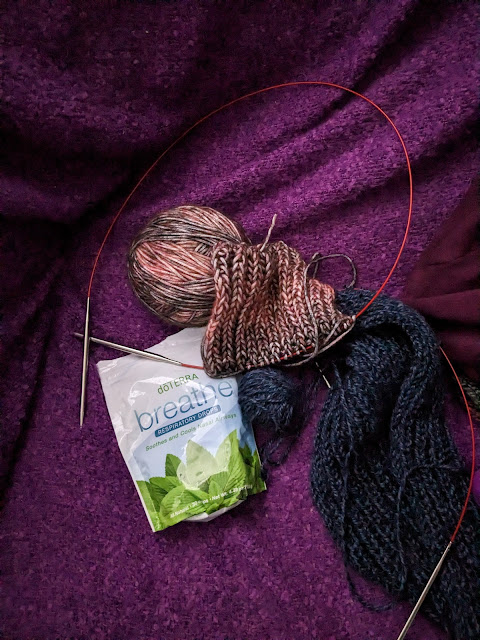 So there's been a lot of knitting and cough drops going on here, plus also Theo and his WIFE (OMG, he's married, more on that later) have moved in for a few days between apartments, just to keep things interesting.

It's really time I gave that girl a blog name, as she does seem to be sticking around. At least, I hope she does.

We have a decent-looking Christmas tree, which is a huge relief, because when Susie and I went looking for one at Home Depot on Monday, it was slim pickings and we were panicking and I briefly considered spending a ridiculous amount of money on a tree at one of those expensive garden centers, and I also really regretted letting Larry decide last month to give away the FREE artificial tree from last year (look, he never really liked it and the Scentsicle trauma has barely faded). Susie and I came home treeless, clinging to the hope that the 60 trees the Home Depot guy assured us were arriving Wednesday would solve our problem.

Larry and Susie went back Wednesday (because I was sick) and returned with this:

So, yeah, it's sort of short. But it's got a whimsical little tilt to it that makes it look rather Seuss-ian, as if it were standing in the living room of a Who house, AND it only cost $30, so we are all happy.

We had a pleasant Thanksgiving, replete with the traditional stuffing preparation: 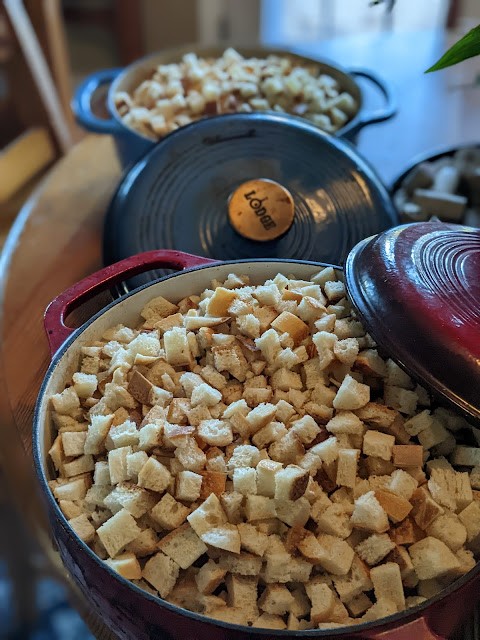 And a new tradition (oxymoron?) of decorating the turkey cookies: 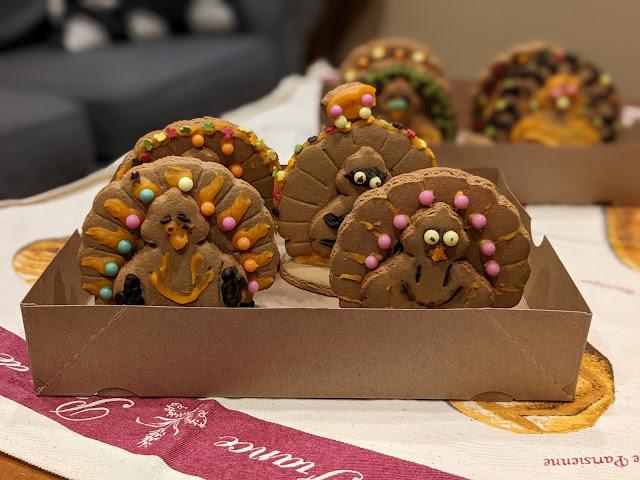 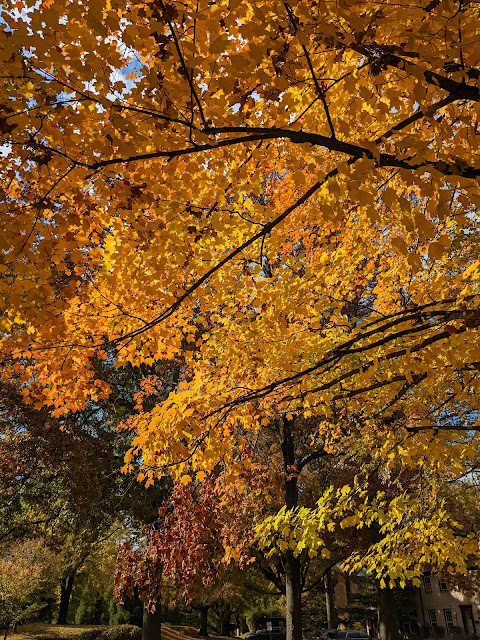 Which means there was the traditional making of the applesauce: 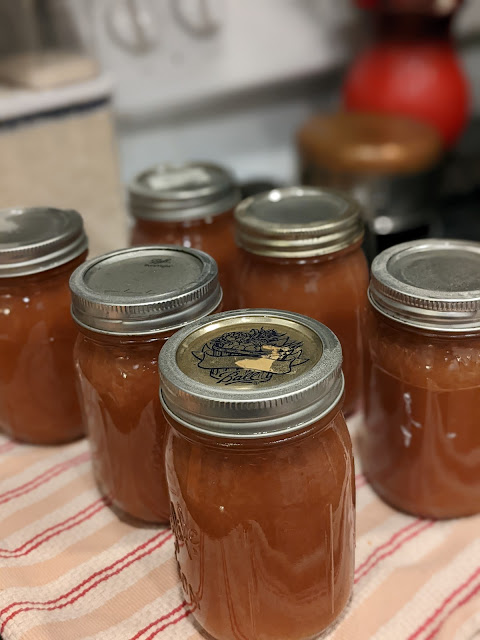 And bike riding, as Larry and I continue to try to convince ourselves that we are still fun:

And then there was the totally new experience in October of traveling to a grown child's wedding. We had to get to Florida, so I came up with the plan of taking the auto train instead of flying. For the uninitiated, the auto train travels overnight from the DC area down to near Orlando, and you can take your car on it. In my defense (for those of you who are already shaking your heads), in September the airlines were a mess and people were getting kicked off flights right and left, so it seemed like a rational decision at the time. Sort of.

And because I am efficient and cheap, I thought it would be a great idea to arrive the day of the wedding. Transportation and sleep - 2 costs rolled into one!

Okay, I can't really defend that one.

Looking back on all this, I'm not sure why Larry did not step in at this point and stop me. Because, really, I had it all wrong. First, I conveniently forgot that I do not sleep well on trains. Second, I read the arrival time wrong, and our "cushion" of maybe 4 hours (FOUR HOURS) between train arrival time and showing up for photos was really 3.

Did I mention the hotel and wedding were 1 hour from the train station? OMG, I am an idiot.

So we got to the train station and learned the train was running 2 hours late. So, let's see, 3 minus 2 = 1 hour to dress and get to the wedding. While I was doing this math in my head and trying to convince everyone it would work, Anna called, because apparently Susie had been texting her that I was not making rational decisions. Anna explained to me (all too gently, which made me start crying) that I was about to miss Theo's wedding if the 5 of us (me, Larry, Susie, Rachel, and - no joke - Rachel's boyfriend) did not get back in our car immediately and start driving.

"You can make it, Mom," she said encouragingly. "You just have to start driving NOW."

You know that scene near the end of Ghostbusters where Egon tells them they have to cross the streams (an hitherto unthinkable action) because that is the only chance they have to kill the monster they were facing? And the rest of the crew looks at each other doubtfully and then Bill Murray shouts, "I LOVE THIS PLAN!" ?

That's how everyone acted when I said we'd have to drive all night. They were like, "Yay, best plan ever!?!" and jumped in the car. You've got to give a lot of credit to Rachel's boyfriend, who did not bail at this moment. I mean, he could have just called an Uber and gone home. That guy really knows how to roll with it.

So then we drove. And drove. And drove. Larry and I took it in 4-hour shifts, with a brief stop to eat the fun picnic supper we had planned for the train, only we were outside a rest stop in North Carolina and it was really cold out and NOT FUN AT ALL. We got to the hotel at 5 AM and - God bless them - they let us check in early. I got 2 whole hours of sleep. Because who needs to look their best at a wedding? Not the mother of the groom, for sure.

I still haven't looked at the pictures. I'm scared to.

We were staying near Cape Canaveral, so naturally David (he and Anna had arrived by air the night before and were well rested, because apparently they know a lot more about travel and weddings than their mother does)...where was I?...Oh, yes, David wanted to go see a SpaceX rocket launch, so I jumped into his car with Susie and did that, and then we zipped back to the hotel to dress up and go to Theo's wedding, which made no sense at all, because when the heck did Theo turn into a full-fledged adult who can do full-fledged adult things like get married? I swear, they're letting kids get married these days - KIDS!

I mentioned the 2 hours of sleep, right? I can barely remember anything from that wedding. I recall trying hard to make coherent conversation with the rabbi and to remember the names of all the bride's Canadian relatives who seem to have traveled just fine to Florida without any trauma involved, but really, my brain was not firing well at all. It's just a blur.

So there you have it. People keep asking me how the wedding was, and I draw a blank, because what I mostly remember is that desperate drive down an eerily empty 95, all the while wondering how a supposed adult (um, moi) could mess things up so badly.

So that was October.

In September, we took the camper van to our favorite campground in Acadia (the one with the marvelous bathrooms and pastries in the morning), and Larry got to strap his kayak to the top of the van, which made him super happy, because why keep things uncomplicated, right?

Although, I do have to admit it looked sort of cool:

It was the first time we'd been there without any kids, which felt sort of weird but was also really relaxing because no one was crying or threatening to run away. A nice change, is what I'm saying...

We ate all the good food:

And we went on hikes:

And generally enjoyed ourselves, which - again - felt sort of weird. I guess we'll never recover from the scarring experience of taking numerous children on camping vacations.

In August we had Anna and Rachel's birthdays and I annoyed both of them by insisting they sit in the Queen of the Day chair while opening presents, because I was very proud of myself for decorating.

Susie and I also made our trip to Lake Placid in August, and I managed not to get sick this time, so I guess I'm allowed to go back. Another friend and her daughter were also there, and the friend and I sounded like pathetic climate refugees the entire time, saying things like, "Oh, this is great, we can sit outside without wanting to die!" and "The air! It's so refreshing!" and "What do you mean you don't need to cover yourself in bug spray every time you step out the door?"
The July weather here traumatized us, is what I'm saying.

Oh, and judging from this photo, my lantana on the front porch did very well this year, because they are apparently not at all traumatized by hot, humid weather:

And a side note - THESE have been mysteriously reappearing in my miscellaneous drawer:

And that's all, folks! Whew! Remind me not to let 5 months go by again, that's way too much to read about all at once, I'm thinking. But now those memories are saved for posterity, and if COVID kills me, my kids will be able to read this and remember just how bad their mother was at making travel plans.

That comforts me somehow.