In Which I Sound Maudlin...

Theo's gone....as Larry said, "One launched, five to go!" Larry and I felt great yesterday, knowing that Theo was off to college with his ROTC money and the guarantee of at least 4 years in the military after that. We rejoiced that, for the time being at least, we could stop interfering in his life and let him try his wings.

I should have checked his suitcases and boxes before he left, however. It appears that Theo inadvertently took 18 years of my life with him, perhaps packed in among the bed linens (X-Long Twin) or maybe in the box with his winter clothes. He took with him the pregnant 28-year-old who worried throughout her first pregnancy that she wouldn't love her own child. He took the young mother who assiduously read aloud to him while he nursed, devoured all the parenting books she could get her hands on once he was born, and generally acted in a totally nauseating, new-parent, know-it-all fashion for the first 5 years or so of his life. He took with him the many-times-pregnant mom who taught him to cook by calling directions to him in the kitchen while she lay - felled by morning sickness - on the couch.

All that remains here with me, for some reason, is a middle-aged woman I don't even recognize - a woman who keeps remembering the times she yelled at her eldest, or expected too much of him, or otherwise totally messed things up. That is, when she isn't gazing fondly at his little-boy face in old photo albums...

What's up with that, anyway?

But the more things change, the more they remain the same. Here, for your viewing pleasure, is the drawer full of abandoned zucchinis: 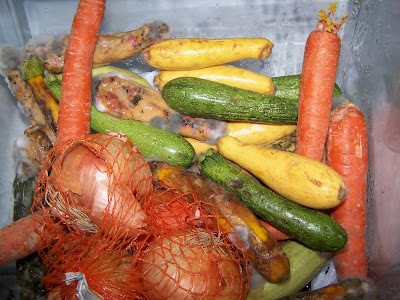 If you click on it, you get a better view of the fuzzy parts. Just be glad you can't smell it. The odor makes roadkill seem appetizing by comparison.

So give me a break, MadMad, with your pretty 4-month-old Easter eggs! You'll have to do better than that to run with the big dogs, you know...
on August 20, 2009