While adjusting this week to my oldest having flown the nest, I realized that while children do grow up and leave, there is still a relationship in my life that is until-death-do-us-part forever, a comforting constant in an ever-changing world; and it's a relationship that I have been sorely neglecting of late. Yes, that's right, ladies - my refrigerator has been crying out for attention, in the only way it knows how.

The other night Larry managed to spill an entire container of homemade salad dressing in my over-crowded, crying-out-for-help refrigerator. That's when I realized it was time to focus on my refrigerator's needs instead of mine for a while. Because, really? Green globe grapes doused in vinaigrette are not ever going to be the hot new thing in the culinary world.

So we both dove in and removed all the vinaigrette-drenched items, and I got to hear Larry say things like, "What's this second jar of salsa doing open?" Yeah, I know - he must live on another planet, right?

But I mustn't rag on Larry too much. To his eternal credit, he discarded the reeking zucchini last week. I guess he was afraid that otherwise I would decide to start over by buying a new fridge. You know, I haven't forgotten that sweet little number with the French doors at Best Buy. Ooh, la la!

Where was I? Oh, yes, so I decided to stop moping about my missing child - a child, by the way, who happens to be of the male persuasion, unlike my friends' missing children, who are girls and don't mind communicating all sorts of fun information to their mothers back home. The upshot of which is I have endured all my similarly bereaved friends saying things like "Didn't Theo tell you about the orientation sessions? Vicky told me it was all sex, condoms, STD's..." or "Katie says the dining hall food is awful - what does Theo think?"

Just twist that dagger, will ya? I mean, Theo e-mails me; but it's more along the lines of "Thanks for the cookies" (What? He's been gone almost a whole week, you know...) or "Can you send me the CD's I left on the computer desk?"

But even though a guy doesn't communicate the way the girls do - with all those wordy-wordy words - he's still able to get his point across efficiently. As I cleaned out the refrigerator yesterday (remember? this is a fridge post - try to keep up), I came across a half-full jar of applesauce. And next to it? Another applesauce jar, opened by Theo the day before he left. Because how could he leave me with just one open jar of that stuff in my fridge? He never has before. 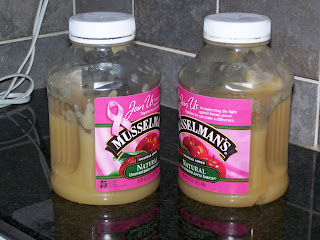