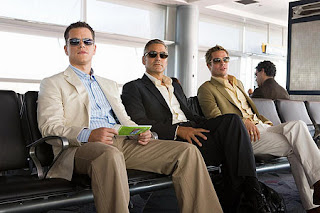 As has been discussed here before, I am the Rip Van Winkle of movie-viewing. I didn't know who Matt Damon was until a few years ago when my husband dragged me to see The Good Shepherd. I'd never even heard of George Clooney until Mrs. G named him Secret Boyfriend #9 and enlisted him to play one of her husbands in the soon-to-be HBO series Bigger Love (also created by Mrs. G).

So! Larry and I just watched Ocean's 11. First time ever. Because, hey, the movie has only been out for 9 years. You know, I'm just glad I'm seeing movies from this century. I spent all of last year trying to catch up on the 1990's. (Office Space, anyone? Sixth Sense? Do you know how humiliating it is to wait 12 years before understanding the line, "I see dead people"?)

Unfortunately, this particular movie contained a large cast of characters and a somewhat complicated plot. Larry had to endure my saying, "Who's he?" and "How did that happen?" throughout the entire film. I'm thinking it's a good thing we had neither time nor money for much movie-watching in the early part of our marriage. If Larry had ha 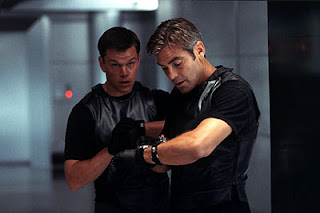 d fewer years (and fewer children) invested in our conjugal union already, he might have been tempted to throw in the towel after an ordeal such as the one I put him through this evening.

The movie? Oh, yes - 2 thumbs up (does anyone say that anymore?) It was a total eye candy experience. Although that probably wasn't Larry's takeaway on it...