No Time For Titles

First, a correction - Friday I claimed that Ree had over 400 comments already! 400! As in, a very big number! Ann in NJ, as first commenter, gently informed me that somehow that number had jumped to, uh, 24000 in the 15 minutes since I had posted this information. Seems that it was 400 comments on just the first page that I had noticed. I didn't even know it was possible to have more than one page of comments. Jenn tells us that the final total was over 25000. 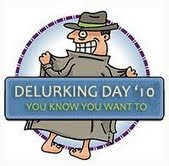 Meaning that Ree owed over $2500 dollars to charity....rather than the 40 dollars that I had so uncleverly calculated.


Second, RobinH, taking pity on my lack of pixels and computer ignorance in general, sent me a corrected version of the delurking badge (over there to your right). She claimed that she just happened to have some extra pixels lying around and didn't mind sharing them.


So, for those of you keeping count, that is 2 commenters gently humoring my total technological ineptitude. The blogosphere is a very kind place, if you ask me - my teeny-tiny corner of it, anyway...

I've got a fridge post coming - it features my Holiday Collection. What? The holidays are over? No wonder that stuff doesn't look edible. 3-week-old pot roast, anyone?
****************
It's almost Monday - I'm going to post this instead of waiting for the funny to come up and hit me in the face. I don't think it is gonna show tonight. You can always check out Sue instead. She's got a lock on funny.
on January 17, 2010