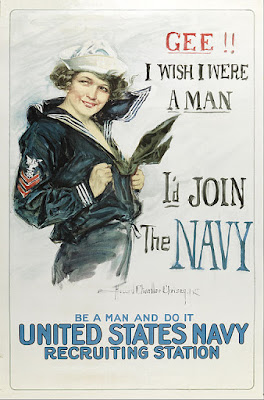 There's a lot of talk on a day like today about how selfless military people are.  People left and right in the blogosphere are thanking veterans like me for our service.  So I just want to set one thing straight.

I joined the Navy because I needed a job.  I had student loans to pay; I was ashamed of not being on my own (unlike many "kids" in their 20's nowadays); and no one wanted to pay a fresh-faced History major anything close to a living wage.

In other words, I joined the military for totally selfish reasons, as do many in the armed forces.  I joined for money, I joined to gain my independence, I joined in the hope I would get a chance to travel.


What I got was a lot more.  For the first time in my life, I worked and lived alongside people of another skin color.  For the first time in my life, I saw African Americans in positions of power.  And I came into close contact with those heretofore exotic people known as "Southerners" and "Texans." (And I learned very quickly the difference between the two.)  I met people who were from comfortable backgrounds and people who had signed up because they were tired of crashing at friends' houses and getting food from dumpsters.  I met people with college degrees like mine and people who had never even considered college as an option.  I also encountered people like my husband-to-be who were taking advantage of the tuition subsidies the military gave them to earn their degrees.

I learned in the military that America is a lot bigger than any one of the segregated social bubbles in which we live and are brought up.  I learned that an organization as hidebound and conservative as the military could still be in the forefront on issues such as equal opportunities for minorities and for women.  Most importantly, I learned that people of different races, religions, and beliefs are able to work together toward a common goal.

I think that last is a lesson that a lot of people in our country today have forgotten.  Maybe they've never even learned it.  It's easy in this country to stick with your own kind, easy to become convinced that your reality is the only reality.  You can watch "your" channels, read "your" news, listen to "your" radio stations.  But the truth of the matter is, this is a really big country with all sorts of people in it.  And none of them are better or more "American" than any of the others.

Go ahead and thank me for "serving."  But realize that I benefited from my service to my country more than anyone else did.  I hated a lot of what I had to do, and the military does have its own particular brand of crazy; but I came away knowing a lot more about my fellow citizens than I could have learned by staying in the familiar bubble of my particular upbringing.

Would you believe that lately I have actually had people say to me, "How could you let your son go into the Army?"