Not Crazy Yet, But Darn Close 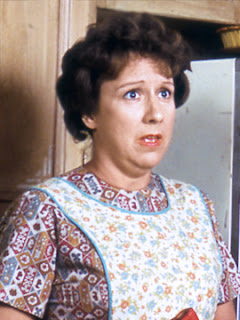 Just popping in to announce that someone named Denise (who posted as Anonymous) has won the prize for correctly identifying the source of the Cling Peaches post title.  Edith Bunker, in one memorable episode of All in the Family, regaled Archie AT LENGTH with the story of how she messed up the car in the grocery store parking lot, and Cling Peaches in Heavy Syrup played a big part in that.  Halfway through, Archie threatened Edith with I-don't-know-what if she uttered the words "cling peaches" again.  So she resorted to saying "hmmm....hmm...hmm" instead.

So, Denise, if you are reading this, please email me your info.  If I don't hear from you, Kayla will win instead.  She's the only other person who knew what I was talking about.

As for the second Anonymous who commented on my pre-Oscar post by saying, "Are you being silly? If you read a newspaper or Internet you would have heard of ALL the movies and basically the plot from beginning to end. I have not seen any of them but I of course know every single actor...the George Clooney thing makes no sense..you know he is with stacey Keebler who was on Dancing with The Stars? " -- I want her to know that her comment made me flash back to that scene in Annie Hall where Alvie Singer is at the beach house with his post-Annie girlfriend and she is watching him chase lobsters all over the kitchen and saying, "Are you being funny?  I mean, you're kidding, aren't you?  I don't get it."

Apparently, Anonymous doesn't hang out here much, or she would have read this post and realized that, no, I wasn't kidding.  Not one bit...

Just realized my post title makes no sense unless you understand that I'm still chasing down those darn head lice.  Gah.  More tomorrow....