There's been a long battle fought here, folks, the battle to bring Larry into the 21st century -- the struggle, as tech-savvy Brian puts it, to get him to trust the machine. We've made a bit of progress - he does have a smartphone, after all; but there are still some modern-day staples Larry simply refuses to get on board with.

For instance, on Father's Day, we bought a GoogleHome for him (oh, okay, it was for us), and he made us bring it back. "Why would you want a microphone in our home, listening to everything we say?" he demanded, exasperated at our naivete.

He shook his head in disgust. Obviously I was willing to sell my soul for a mere mess of pottage, or - in this case - the ability to say, "Hey, Google, play some Billy Joel" and have "Piano Man" come blasting out the living room speakers.

Similarly, Larry fought the good fight against that newfangled thing called GPS for a long time, instead printing out his trusty MapQuest maps like it was 1999. But he has gradually become accustomed to using Google Maps on his phone when he drives somewhere new; so last Saturday, when he had to drive Rachel and 3 other Civil Air Patrol cadets to their week-long Encampment in a rural part of our state, he threw caution to the winds and left with only his cellphone - no stacks of computer-printed routes or maps whatsoever. Oh, we were so proud of him!

You know what happened, right? Do I even need to tell you?

His connectivity dropped out somewhere in the middle of farmland, in an area he was not familiar with. Luckily, one of the cadets had a different cellphone provider, so they got by on his GPS for a while. In fact, they were on a road Larry remembered from previous years and he was pretty confident where he was going, when the cadet said, "It wants us to turn right here."

That didn't sound right to Larry, but hey - trust the machine. So he turned from a paved highway onto a paved 2-lane road. Which became a not-so-paved 2-lane road, and then a dirt road, and then nothing. Nothing but a rutted track and some cornfields, one of which happened to have a huge Confederate flag draped across it.

This is usually the point in movies where you know things are not going to end well. 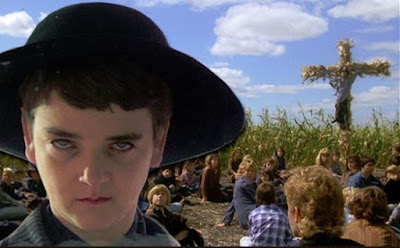 So Larry turned his car full of Yankees around and hightailed it back to the main road, where by luck and Apple Maps (which came to its senses) he finally made it to the Army base they were aiming for. And he came home swearing never to leave the house without his MapQuest printouts again.

It would be hard to overstate how smugly vindicated Larry is feeling right now. I think it rivals the purple paint episode of 8 years ago for smugness, actually. I mean, if he was right about the fallibility of GPS, WHAT ELSE must he be right about, his lone voice crying out in the wilderness of 21st-century technology? Or so he thinks.

Meaning, I'll NEVER get him to come around on that GoogleHome gadget now.