Isn't Summer Supposed To Be Lazy?

I've been busy cooking. There are a lot of people here, and they all want to eat. Dinner last night: 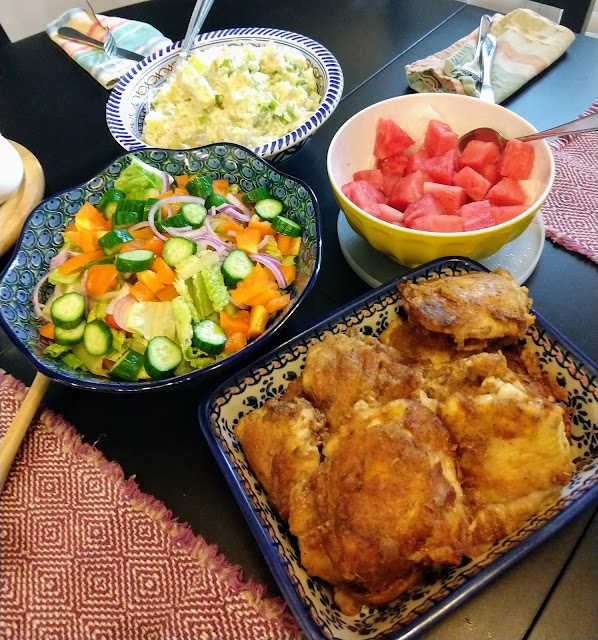 We've been going through a watermelon a day here, almost. A couple of heads of lettuce. Potato salad by the bucket. It's crazy. But in 3 weeks we go to the beach and I can get a break. Until then? I'll keep cranking out the food.

I've also been doing things. Larry and I met with friends Thursday evening to see a live taping of Wait, Wait, Don't Tell Me. We do this every year, only - whoops - not last year or the year before, so actually it was THREE YEARS AGO that we saw them and it doesn't seem like it. Seems like, oh, I don't know, a few months? Time is weird. And it gets weirder as you get older.

Actually, I guess that's all I've done. Aside from cooking - did I mention that?

Susie has turned into Miss Entrepreneur this summer. Last I checked, she was cat sitting for one neighbor, hauling trash/recycling cans for another neighbor, and watering flowers for yet another neighbor on vacation. That's in addition to two other lengthy watering jobs she had this summer. She's rolling in cash. She's also very friendly, so other people with kids tend to take her places - historical sites, water parks, you name it.

So, yeah, not a lot of parenting being done by moi this summer - aside from that cooking thing, I mean. I did mention that, right?


Oh! And, for the first time ever, I had the inside of my car professionally cleaned. You see, I'd been wondering why Theo's 2008 CRV always had a new-car smell to it, so I asked him and he said, "Oh, I have it cleaned once a year."

Cleaned once a year...

People, it's as though the proverbial light bulb switched on over my head. Cleaned once a year - who woulda thunk it?

It's not as if I hadn't considered getting my car cleaned before. But it seemed like a big-deal, once-in-a-blue-moon sort of thing that would be difficult to do. Here was Theo, though, acting as though it was really simple, like filling up the gas tank or something.

Really, I can find no explanation as to why this surprised me. In my defense, we used to have absolutely no extra money to spend on things like that. And often our car was so filled with car seats and other junk that cleaning it out (prior to taking it to be cleaned) was sort of overwhelming.

But those days are long gone, thank goodness, and Lord knows my car desperately needed something done to it. It didn't help that Larry, on his way out the other day, opened up my back hatch and all the windows to air it out and didn't tell me.

Yes, it rained. Of course it did.

That was pretty much the last straw. I mean, it was either pay to clean the darn thing or else drive it over a cliff. Since I don't like heights, I brought my car in for the $40 car wash/interior clean special at the place down the road. $40! Who could beat that?

No one. No one could beat that, or even meet it, if the truth be known. I ended up spending $250. (Hey, spread out over 9 years, that's just, uh, let's see here...$27.80 a year - I can live with that.) They shampooed all the carpets and the mats, shampooed the seats and the interiors of the doors, blew the little bits of gunk from all the crevices, fixed my headlights so they weren't clouded over, shined everything up...


Here's the part where I show you a picture of the finished product, right? Only, I forgot to take one. And it's raining right now, so I'll just have to leave it to your imagination. Trust me, it was worth every penny. I sit a little taller when I drive right now, secure in the knowledge that my chariot/minivan simply gleams. And, yes, the no-food rule HAS been reinstated. We'll see how long that lasts.