That title came from somewhere - an old Doonesbury joke, I think...

For weeks, Brian has been planning his birthday celebration. He had drawn up extremely elaborate plans of how I was to decorate his sheet cake - the final design included a volcano spewing lava and ash into the air, people running away in terror, etc. All of which was way beyond my skill level. (Actually, anything more difficult to draw than a smiley face is beyond my skill level.) So then, naturally, I was beating myself up over how I don't make super creative cakes for my kids' b'days - you know, the way Dawn (Because I Said So) does. Because she has 6 kids, too, you know; but you don't see her telling them, "Hey, I let you pick out the frosting color - what more do you want?" Nope - she makes cakes shaped like cars and...and...other stuff like that. Which just points out to me my complete inadequacy as a mother. (You hear that, Dawn? Stop torturing me.)

Anyway, necessity is the mother of invention and all that; so, even as I despaired of ever being the fun sort of mother who makes Wow! birthday cakes, I suddenly remembered the Barbie Doll cake (check it out), where one uses a 2-qt measure to bake the batter in so that it comes out skirt-shaped. Which, I realized in a flash of brilliance (or maybe it was a flash of desperation), is also volcano-shaped. And thus great ideas are born...only, it didn't work quite as I envisioned. 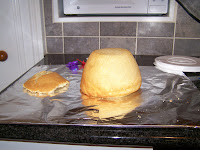 Not very volcanic-looking, is it?

Not only did it look pathetic, but it was so dense and chewy as to be almost inedible. Hmmm....so I made a regular sheet cake (that we could actually eat) and plopped my poor excuse for a volcano on top. And, whaddaya know? It still looked pathetic. 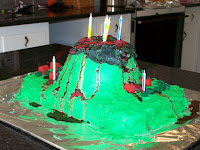 But Brian and David, bless their imaginative little-boy hearts, decorated it with frosting and lava-like frozen strawberries and little Monopoly houses and hotels, and they thought it was the greatest thing since sliced bread. Really. It seems that my kids refuse to accept the fact that I am most emphatically not up to the job of giving them a fun childhood. They like me, in fact (well, the non-teens do, anyway). And how great is that?