Tales From The Fridge

Well, here we are, with a brand-new episode of Tales From The Fridge (I'm still tinkering with titles, can you tell?). Let's see, where's that picture? Ah, there it is, to the right. Not 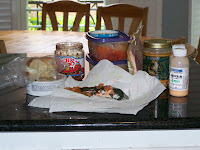 a bad week, actually. In the back row there you can see an almost empty container of cream cheese, atop which sits half an egg sandwich, never eaten. [What can I say but I told you so?]

Next to the sandwich is an empty jar of salsa (which leaves only 3 jars of salsa left in the refrigerator, I just don't know how we will manage) and 2 Gladware containers - the top one contains a(n) UFO (unidentified food object) that fell out of my freezer today and hit me on the head; the one underneath has the remnants of yet more homemade salsa (can't someone stop us?) in it. Out they go!

To the right of the Gladware is an almost empty jar of cashew butter, with the dried-up nutbutter still on the bottom. It has been sitting in my refrigerator for over a month because its disposal presents me with an environmental dilemma: do I toss the whole thing, glass jar and all? Or do I recycle the glass jar like a good citizen, which would require my expending untold amounts of hot water to clean it first? I'm confused as to which choice is the way to a smaller carbon footprint. Please advise.

Moving on...between the Gladware and the cashew butter is expired bacon. I mean, twice-expired, really. I hate it when we waste meat, but somehow this guy was hiding at the bottom of the meat drawer and never got eaten. Probably because I put off cooking him because it is such a mess to clean up. Rest in peace, Porky. I'm sorry I'm so lazy.

On the far right sit 2 bottles of unused Amoxicillin, prescribed for Susie's ear infection. Yup, that's right, I'm a monster - I never gave it to my kid. I said, "Let's wait a day before we dump gut-altering drugs into our 3-year-old," and by the time that day was over, she felt way better. Lest you think I am a total nut, when David had pneumonia at the age of 4...? I gave him the drugs. And believe me, he didn't make it easy.

Where was I? Oh, yes - in the front you see this week's piece de resistance - a moldy zucchini, nestled in paper towels (because it was too gross to pick up bare-handed) and coated with loose onion skins from the vegetable drawer. Yum. Creations like this one take much longer than a week to evolve, so they may be a rare sight if I keep up this fridge cleaning on a weekly basis.

I swear, this whole exercise in food-wastage confession feels almost cathartic. Go forth, my daughter, and waste no more!

*****************
Now, a little catching up - a big thank you to everyone's supportive comments from 2 days ago when it sounded like I was whining about the prospect of having to go to work (for pay) part time. I wasn't so much whining (well, maybe I was) as expressing dismay at my becoming someone who would rather take the time away from hearth and home to bring in some extra money than stay home and cut a few more corners. That preference is sort of a new thing for me, and it took me by surprise. But maybe I'll stay home anyway, and we can just ditch those pesky medical and dental insurance premiums instead. As you've seen, half the time I'm not even using the drugs they're giving us.

Also, I'm shocked, shocked, to hear how many of you people are leaving your children willy-nilly all over the place! I had thought I was the only one. Rather, there seems to be a veritable epidemic of inadvertent child abandonment happening these days, and I am proud to be a part of it. Thanks for all the great stories! I think Kari's tale left the most vivid (and pathetic) image in my mind, though. Just picturing that poor abandoned child chasing his mother's car up the highway on-ramp from the rest area made my day...
on August 06, 2008