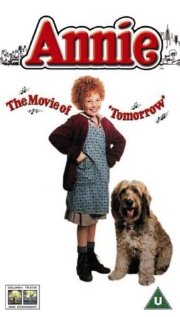 It rained yesterday, so I popped in the Annie video I picked up for 5 bucks at the grocery store.  I had never seen the movie, but I figured the little girls would love it.  I spent half the movie trying to figure out who was the actress who looked like a young Bernadette Peters, because - hey - Bernadette Peters must be too old to still look like that.

Of course, it was Bernadette Peters -  from 3 decades ago.

29 years old, that movie was - and here I thought Annie had been produced sometime this century.  How old is Carol Burnett now, anyway?  Is she still alive?  And why didn't they do a better job on that stupid movie?  Was it an 80's thing?  Carol Burnett was its only redeeming feature.

And the dog - Rachel really liked that dog...

In other news, I managed to spend 500 dollars on groceries today.  But I bet my Harris Teeter discount card I'll still need to go to the grocery store tomorrow for something or other.  It's a special talent of mine.