Oh, blessed cool evening air!  The humidity has dropped and our windows are open - this is heaven.  Doesn't hurt that the kids are all out of the house with Larry at a minor league baseball game.  Dollar night, folks - can't beat it.

Has anyone seen this piece of inanity yet?  No?  Here's the kicker:

Wow, first we have disposable wipes and disposable diapers; and now?  Disposable spouses!  Use one up and get another!  What's striking about the above (aside from its complete misunderstanding of the marriage concept) is its lack of awareness that the children don't just disappear into their own lives after age 18, never to be seen again.  There's also a refusal to acknowledge that stuff happens in our lives, BAD stuff, even before our lovely offspring have been released into the wild to spawn.  Can you picture saying to your 50-year-old Parkinsons-stricken spouse, "Well, our contract is done, kids are raised, and I'm off to seek my own adventures now!  Have a nice life!" 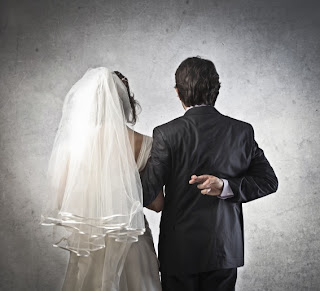 Essentially, the above concept assumes that the married couple has nothing in common but their kids.  No shared history, no shared responsibility toward each other, nothing that would add depth and meaning to a relationship that has already endured for at least 18 years.  Has this author never known a long-married couple?  It's not necessarily about exploring new passions together as they age; it's about deepening the ties they already have, sharing the memories that only the two of them possess, enjoying their grandchildren together.

Don't get me wrong - I am not in the least Pollyanna-ish about marriage; and I'm not against divorce, per se.  I have friends getting divorced left and right, and for good reasons.  But at least they tried to build something lasting.  At least they regarded their marriages as something more than a limited partnership with a pre-determined expiration date.  Lifelong marriage is a worthwhile, if lofty, goal and shouldn't be abandoned wholesale.

Pretty ambitious talk for a woman who can still become incensed by her spouse's toothpaste tube habits, I'll admit...