Rachel and Susie and I had quite the girly-girl day today, shoe-shopping (Payless BOGO half-off!) and going out to lunch and browsing at Michaels.  I came home after a few hours of this immersion in all things feminine and begged Larry to take Susie to the pool, because, really, there is only so much enthusiasm and chatter one person can take in a single day.  I am done. 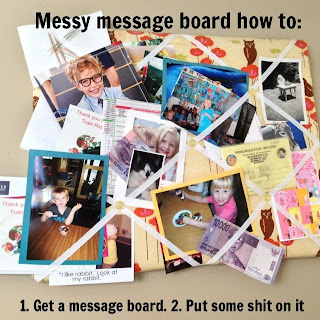 To recover, I vegged out on the Internets and discovered this Pinterest board that was apparently created by someone who is most emphatically NOT Martha Stewart.  [Warning: if you don't like the f-word, don't click.]  I particularly liked her messy message board how-to. Then I bestirred myself to prep a pan of boppies early, as I will be taking Rachel to her tennis team try-outs right before dinner.  By the way, it still makes my non-athletic self giggle to think that I'm taking a child of mine to try out for anything.  Rachel's wearing her new Payless sneakers and her Target tennis skort, so essentially she feels as though she is going to kick some a**.  Only not in so many words...

Larry and the boys arose at 4:30 this morning to help their Boy Scout troop set out orange cones for a local triathlon.  I signed them up for that, because it gives me a happy feeling inside to watch the teen boys drag themselves out of bed at o'dark thirty.  I felt a little bad about Larry, as he became a sort of collateral damage in this nefarious plan of mine.  I don't feel too bad, though, because he woke me before he left by flicking the light on REPEATEDLY to "look for stuff."  That's one passive-aggressive spouse, I tell you; I may decide to go back to my plan of decorating our bedroom with posters of world-class tennis hunks, just to bother him.  What can I say?  Maturity is not my strong suit.