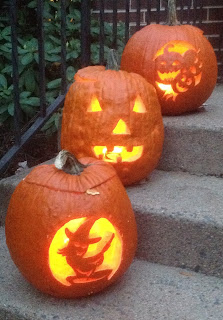 44 bags of candy handed out
3 trick-or-treaters: a pirate (Susie, and a very cute pirate she was), a black widow spider, and a reluctant teenage bat (Brian, who realized at the last minute he wanted some candy)
1 mom (that would be, uh, moi) who kept all the short, chewy strawberry Twizzlers for herself
8 costumed neighbors who attended our candy-swap party after the main event

All in all, it was your typical Halloween around here. We're still eating candy, although the girls are being remarkably selfish about their KitKats this year.  You know, you think you're raising them right, and then reality just up and smacks you in the head.

But that's okay, I just wrote them both out of the will.


Larry has suddenly become interested in all the various little campers I've been looking at for the past year or so: the Little Guy, the Happier Camper, the Alto.  It might have something to do with the fact that we actually lost a little piece of our camping trailer last summer on our way up to Maine. Picture it: We're 3 hours late getting on the road, only halfway there, stress levels cranked up to max, and someone pulls up next to us on a major highway, trying to get our attention.  At first we didn't notice, because our car is quite a sight when we are towing the camping trailer with the cartop carrier strapped to its top, 2 bikes on the roof of our minivan, and 3 more bikes mounted on the back hatch.  I mean, LOTS of people stare, because we look like the Beverly Hillbillies of the camping set. But then I saw that the guy was gesturing at our camper and trying to tell us (at 60 mph) that something was wrong. We (meaning, Larry) managed to pull off the road and fix the problem, but not before one of those thingies (legs? struts?) that holds up the camper had gone missing.

So, earlier this week, Larry asked me to show him all the mini-camper websites and even appeared to be listening to me as I explained what I thought were the pros and cons of each one. Then he spent the next few days doing his typical obsessive thing of comparing and evaluating absolutely every detail about these things.

Me, I just look at the pictures.

So whose method is better? I can't say, but I can tell you that we both pretty much came to the same conclusion as to which camper might best fit our needs.  And my way left me more time to eat the Halloween candy. Nuff said.

Of course, all this research was completely theoretical, since we don't happen to have $12 - 20K lying around right now to throw at our camper problems.  But, hey, we all need our fantasies, don't we?