I don't even know what day it is, for heaven's sake. Susie's been sick all week with a low-grade fever and constant headache and terminal complaining, and then I picked up some sort of stomach bug yesterday afternoon, which was delightful, but hey, at least I had a new, sparkling-clean toilet to be sick on.

Gotta find happiness where you can, folks.

So I'm spending the day STARVING to death and knitting and watching I Love Lucy on Amazon Prime with Susie. The knitting is an attempt to use up all my sock-yarn remnants - in theory, that thing there to the right will eventually be a colorful lap blanket. In theory.

Oh, and the contractor came back on Wednesday and tore our basement bathroom apart. It looked so bad to begin with that it really doesn't look much worse right now. He's still in the house today, working away, while we feel like hell. I had to get up before 7 and be fully showered and dressed and have the bedroom neatened up (because he still has some work upstairs) by 7:30.

Would it be terribly wrong to call that an Anne Frank morning? Yes, I guess it would, but I just did anyway.

Even if I didn't have a guy in the house working on the plumbing, I still wouldn't be able to spend a sick day sitting around in my pajamas. The once or twice I've tried it, THAT's the day 5 different people stop by, because I live in a stopping-by sort of neighborhood. Don't get me wrong, that's usually a good thing. But not on days like this. Maybe I should just stick a QUARANTINE sign on my door. Do they make those any more? 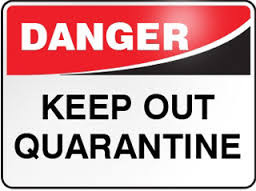 Or I could just use this one: