Fame (No Fortune, Though)

Okay, the other day I tried to read some blog comments on my phone. Usually I just look at my blog on my desktop computer; so I never realized that the type size is REALLY TINY on the mobile app version of this here literary masterpiece.

So I figured out how to go into the inner workings of the blog and change the pixel size or whatever (hey, that's nothing to sneeze at - I had to click "advanced settings" to do it, all the time feeling pretty tech savvy, I'll admit). So if one of you could tell me if that helped at all, that would be good. I honestly can't tell. I mean, I THINK it's a little easier to read on the phone now, but I'm not sure.

You know, when I was growing up, no one could read anything on their phone.

A commenter on the last post (knittergran) asked for details about that narrow blue house I took a photo of. It's called The Spite House, which was featured in the NYT in 2008. I didn't realize until I read the article (click on that link, will you?) that the interior walls of the house are actually the exterior walls of the two neighboring houses. Fun fact! The article doesn't give us near enough interior pictures, IMO, so if anyone can find more...

Let's see, what else is going on here? Spring, for one: 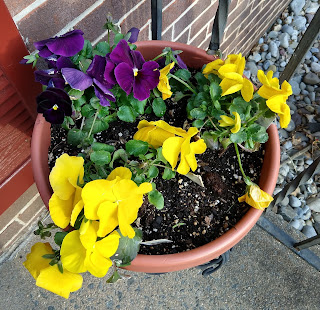 My photography skills are really taking off, I'd say. I mean, bird's-eye-view and everything...

Oh, and speaking of photos, on Friday Brian and a friend participated in the students' walkout and march in DC. They both ended up in a CNN photo of the event, and we were all like, "Oh, look, you're over to the side there in this news photo. That's sorta cool." But a few minutes later I noticed this article and I was screaming, "BRIAN, OMG, LOOK, YOU'RE IN THE ONION."

I have really screwed-up priorities, I'm thinking. I mean, I didn't yell like that when he got into college, even. But, hey, THE ONION...

In other news, Susie has bonded with our newly acquired flock of sheep. Unfortunately, her affection for these ovine creatures means that she became upset when she caught me trying to sneak two of them out of the house. (I had promised them to my knitting friends.) So, yeah, not sure what to do about that...

Anyway, I will leave you with a picture of the tableau I discovered in her room yesterday: