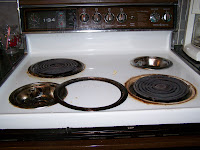 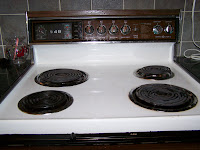 I had to clean the stove today, since I can't even turn it on without setting off the fire alarm; so I thought I would make the task fun by taking before and after pictures. Well, I must be a lousy photographer; despite my best efforts , the after pictures really do not look much better than the before ones. Go figure. Maybe it is my camera's idea of an April Fool's joke.

I hate April Fool's Day. I have never understood what is so funny about making someone else (as in, um, me) feel like an idiot. Not that I resent it or anything, Another Gray Hair; but if you do end up actually pregnant at some point in the future, enjoy that morning sickness, okay? Humph.

I took the younger kids to the library this afternoon; I only had to pay 25 dollars this time to get my account thawed out. If any of you are keeping a running tally of how much money I have paid to that lovely institution this year, please do not share it with me - I don't want to know.

Remember the other dad Larry spent 24 hours with on the Boy Scout camping trip? The one whose son became best friends with David? Turns out Larry learned neither his last name nor where he lives. This incident just may explain why Americans resorted to torture* to get information out of detainees: the interrogators were male and had no idea how to gather information in a normal fashion.

*If you are one of those benighted individuals who doubts whether waterboarding is technically torture, I suggest you go experience it; then come back here and make your report. Make sure to bring pictures so we can see what a great time you are having.
[No one splits legal hairs better than our current Administration, I must say.]