The Scariest One Of All 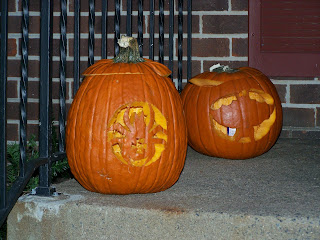 Whew! Caught up in the Halloween plus House Guest frenzy over here! I've been promising people pictures of the jack-o-lanterns, so I am taking time out of my busy Snickers-eating schedule to post a few photos. Above, you can see the spider and the bat. My photographic skills (or lack thereof, really) do not do justice to these pumpkins. They looked fantastic. Here's a close-up of the spider: 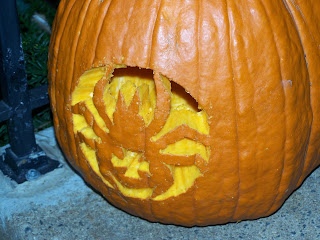 This one is supposed to be a kitty cat, but it sort of didn't work: 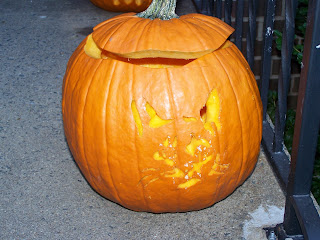 As I do not possess math skills advanced enough to enable me to buy the proper number of pumpkins for our family, Susie and Rachel had to share this one. Rachel carved the cat face on the front, and Susie selected a more typical jack-0-lantern visage for the back: 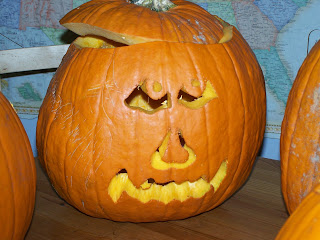 And the last one, alas, does not have a picture that would adequately represent its awesomeness. Theo found the pattern and carved it while I was out. He is also responsible for the carved commentary near the bottom (so don't yell at me, okay?). People were coming over just to see it (and take pictures), it was so awesome. This photo of it simply sucks: 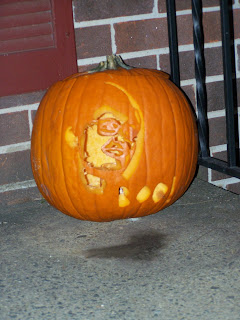 It looks, in this photo, to be portraying some member of the Beat Generation; but I swear, in person, it was such a good representation of the current governor of Alaska that people walking by on the sidewalk would stop and exclaim, "Sarah!"

Do you see how in the photo the pumpkin appears to be levitating? That is totally creeping me out. Do you think it's a sign?

Oh - and we had 2 dalmatian puppies, one robot, and one lego piece trick-or-treating this year. In case you were wondering. The lego costume was easy (meaning, Larry took care of it), and so was the robot. But the dalmatian puppies? I struggled to create a costume for Rachel that would match her sister's pre-made one. You know, these things are way trickier than they look. At least, for craft-impaired people like me. In fact, the only reason Rachel had a tail at all is because Auntie Kate leapt into the breach this week, as it were, and saved my faltering efforts with her special creative powers. I owe her big.

Email ThisBlogThis!Share to TwitterShare to FacebookShare to Pinterest
Labels: Halloween