As The Food Turns: Freezer Edition

"I really enjoy your fridge clean-out posts... I was just wondering though - have you ever considered freezing leftovers and sauces/soups? We inevitably have too much and freezing helps them last longer (although it can clog up the freezer sometimes)."

As a matter of fact, I have considered that. I even have in my freezer a number of foil pans containing dinner leftovers that, in theory, reheat easily. But when I do decide to have a freezer dinner, somehow they never taste very good. At least, no one seems to want to eat them.

I also attempt to save odds and ends that would be useful in future meals. In fact, there are various and sundry items I have thriftily frozen and then forgotten in our kitchen freezer, aka "the black hole." You can see some of them below, to the right. (By the way, I had just managed to snap this picture when the whole tower came tumbling down.)

Let's take it from the top, all right? We have an Amy's frozen burrito, which is str 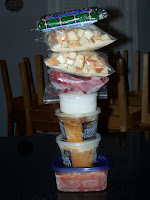 ange, as I have never, ever bought one of these overpriced uber-organic fast foodstuffs myself. I think it may have ended up in my freezer during my friend's kitchen remodel last June. Feel free to comment if you want it back!

Next are 2 baggies of bread cubes. I don't know when I put them in there, and I have no idea what I meant to do with them. Which may explain why they are still here...

Next up - frozen strawberries, handpicked by the children in May of 2007. Yup. I guess I was saving them for a special occasion that never happened.

Below the strawberries is a cylindrical container of ice. Why? Because our electric snow-cone maker demanded ice in this exact shape. We became mindless slaves to this tyrannical appliance, as evidenced by the bag of cylindrical-shaped ice blocks below: 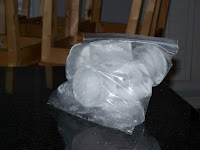 What is really odd is that I no longer even own said snow cone maker.

Below the ice (first picture) are 2 containers of cooked pumpkin from Halloween 2007. Again, that special occasion for which I was saving them must not have occurred. Does anyone know if this stuff might still be good? I put an awful lot of work into it.

Holding everything up is a gladware container of what I think was canned tomato sauce. I must have frozen it after using half a can for dinner one night, just as Joss recommends. And then I promptly forgot about it.

Joss, does this answer your question?

Email ThisBlogThis!Share to TwitterShare to FacebookShare to Pinterest
Labels: housekeeping