I've become one of those Starbucks dwellers, hunched over my laptop, making money.  I love it.  For years I've wondered what people were doing sitting in Starbucks with their laptops on.  I thought they were just showing off that they had a laptop.  Really.

But now - I know!  They were getting the heck out of the house so that they could get some work done.  And then they were wasting some of that precious time blogging, because why not?  And they were eating yummy cinnamon coffee cake because they felt obligated to buy something to pay for hogging an entire table with their precious laptop all evening.

I have met the enemy, and he is me. 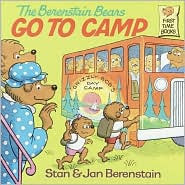 Tonight, however, there was a snake in Paradise.  I had just sat down and plugged in when the mother at the table next to me took out a book.  Not just any book, mind you - but a Berenstain Bears Go To Camp book.  And then - horrors! - she proceeded to read it out loud to her son.

Yes.  Right there in Starbucks.  Tell me, people, have I not suffered enough?  Have I not spent the better part of 2 decades being forced to read these books over and over?  Why - when I have at long last thrown off the traces and escaped to my little coffee shop world of laptops and cinnamon cake - why should I be haunted by the Berenstain Bears?  Is it my fate?

(At this point, a picture of Gene Wilder in Young Frankenstein flits through my brain - you know, the scene where he is tossing and turning in bed, chanting, "Destiny! Destiny! There's no escaping Destiny!"  Alas, no YouTube video available...)

Apparently there is no escape.  I am but the plaything of fate, led on by the illusion of free will...and the mirage of grown-up time at Starbucks...
on July 30, 2009