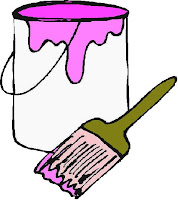 Anyone remember this post, wherein I lamented Larry's poor listening and paint-choosing skills? Yeah, that one - the one where I criticized my husband's paint selection to the entire Internet? After our mandatory week-long cooling off period, Larry and I showed Anna the paint color strip and said, "Honey, which of these colors did you want for your room?" Great care was taken to shield her from any knowledge of which paint color Larry had so foolishly purchased. This experiment was undertaken at Larry's insistence, since he refused to admit that he was wrong, refused to admit that we had both selected Feathery Lilac and not Free Spirit and yet he brought home Free Spirit anyway.

So I presented the color strip to Anna, confident in my assumption that she would affirm not only our Feathery Lilac selection but also Larry's terrible wrongness in not admitting to his mistake. She's my daughter, after all; I know what she likes; and Larry, truth to tell, is a guy - a guy so color-blind he doesn't even know whether he is wearing green or blue. How could he ever differentiate between Feathery Lilac and Free Spirit, anyway?

We all know where this is going, right?

Anna chose Free Spirit. And Larry? Vindicated is not strong enough a word for how he is feeling right now. Smug? Beyond that. According to Larry, he has won a victory for henpecked husbands everywhere, for men like my friend "Harry" who refuses to start a blog (c'mon, Harry!), so I get to steal his words and use them here:

[I] know what I would pick is never going to be chosen by "the committee" so it makes it hard to pay attention and remember which of the many "lilacs" is finally chosen, especially since there are various choices along the way that seem "final." "Ours not to reason why..."

"Ours not to reason why..." - the lament of beleaguered husbands everywhere, I'm sure. Well, today, gentlemen, you can hold your heads high and walk into paint stores without fear, and without "a paint chip in hand initialled by every member of the Paint Color and Wallcovering Selection Committee (PCWCS)" (Harry's words again). Larry has made one small step toward getting our daughter's room painted and one large step for married-mankind.

Now if he would just wipe that irritating grin off his face...