We knitters have a joke. Sometimes you'll see it on a T-shirt:

I knit so I don't kill someone.

If you're an impatient type of person, you'll understand that joke. When I'm in a doctor's waiting room, or waiting for a dental cleaning, or even sitting in the pharmacy for a few minutes, knitting is what keeps me from pacing around the room like a caged tiger.

Actually, sometimes I knit and pace. I'm tightly wound like that.

So I was knitting o 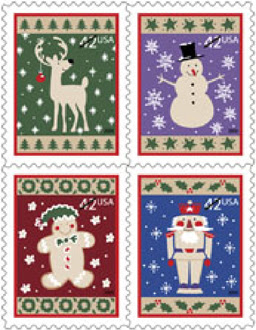 n a scarf while waiting in line yesterday at the post office, whereto I had blithely journeyed, completely forgetting that it is DECEMBER - the month when everyone on earth goes to my local post office to mail packages in preparation for the yuletide festivities. There were 20 people ahead of me in line.

Soothing. Peaceful. Meditative. No one gets hurt.

Ahead of me was an older woman with a package addressed to an APO box. Being terminally extroverted, I had to strike up a conversation (while I knit, of course): "Where's he stationed?" I asked.

"It's my nephew, actually.

Looking a tad uncomfortable with being accosted by a stranger who was reading her package address, she still attempted to return the courtesy and said, "What lovely knitting! That's a good idea, with this long line and all."

How to describe the look of alarm that crossed this woman's face? It was, let's say, a look that made me realize what this poor lady was seeing. What she was seeing was a maniacally-smiling stranger holding two sharp sticks (Harmony circulars, no less - handy for stabbing or strangling!) - a stranger who was violating all rules of proper line conduct by reading the addresses on other people's packages and asking for personal details of their lives.

In short, she was looking into the face of crazy. Postal, even...

She smiled nervously, turned around, and faced front.