I have just survived another Boy Scout Mulch Weekend, festivities I used to wisely refrain from participating in, until I got roped into running the food tent. Pretty much all day Friday and Saturday were taken up by running to Costco, setting up the tent, feeding hordes of hungry boys, reheating food on camp stoves, and praying for the rain to hold off. All of which would have been okay, had Susie not been up in the wee hours of Friday morning with the croup, meaning I didn't sleep and then had to squeeze in a doctor's appointment before the Costco run; and had Susie not been weeping with exhaustion by the time I was able to leave the food tent on Friday evening (a scene repeated on Saturday morning and Saturday night).  Also? Sometime during my all-night croup vigil, I managed to catch the same cold.

So, yeah, I felt AWESOME during all this.  Short on sleep, sick, and stressed as hell listening to my neglected daughter cry...

So, today!  A day blessedly free of mulch, and guess who has the cold now?  Larry, of course.  Only he's a MAN.  He keeps reminding me of how sick he is and how HARD he worked yesterday.  Join the club, buddy - join the damn club. 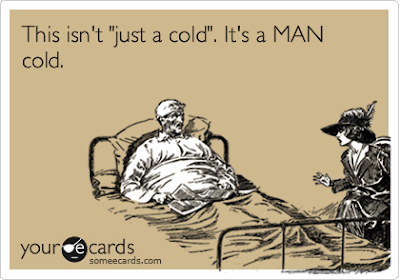 22 years of marriage, and he still doesn't realize I can out-bitch his grumpiness?  What's up with that?