It's hard to find time to blog (says the gal who wasted a good 45 minutes on Facebook this morning), but I constantly have things running through my head to tell you. Plus pictures! 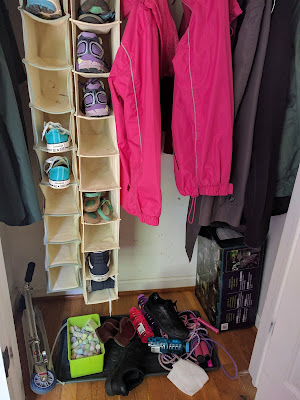 The closet experiment hit a snag this morning. See that build-up of shoes on the floor there? Probably because it is SO HARD to place them in the conveniently hung SHOE HOLDERS that are in your face every time you open the closet doors. I mean, sheesh, am I expecting people to figure that out? I'm a monster, I am.

No matter, my new system is so good, all I had to do was pick up those shoes and slide them into their slots. I don't appreciate being everyone's maid; but for the sake of a closet that inspires joy, I'll do it. That, plus I dock allowances.

"Is that what he's called?" she asked, trying to follow.

"Um, I think so. That's what we called him, anyway." But then I wasn't sure, myself; I mean, can there be only one Sweater Guy? So I went home and Googled "the sweater guy," and sure enough, I found him. The fiber world loves its monikers, apparently. I didn't even try explaining the Yarn Harlot to her.

Anywhoo, I bought a few skeins of yarn there. I needed one skein to complement a color I already have for my planned The Girl From the Grocery Store shawl; and then there were a couple of skeins that were begging to be bought from an indy dyer who I bonded with and was giving a military discount.


Oh, and also a felted dryer ball, because I already had one, but it turns out that you really need more than one to make your clothes soft and fluffy. Supposedly you use them instead of dryer sheets? I don't use dryer sheets, though, so I'm not sure what I am to expect.

I explained all this to Larry and he was totally looking at me like, "Wow, they saw you coming, all right." I'll show him, once the children start exclaiming how soft their towels feel (I imagine like those kids in 70s Downy commercials, if I'm recalling correctly).


Either way, it was only $5. And the man just bought an entire kayak, so maybe he should just keep quiet about any of my fiber expenditures, amirite?