Where Have All The Flowers Gone?

I hosted Bunko in May, and we had a graduation party; but that was 3 weeks ago, which means that the decor theme in my house at this point can best be described as bygone festive. 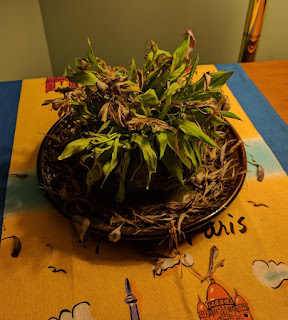 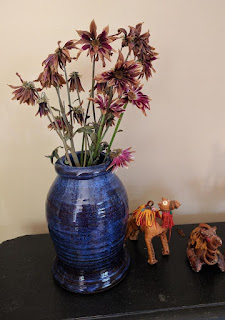 Nice look, right? They're almost Pinterest-worthy, in a macabre sort of way. But we also had Brian's birthday party way back in April, before I left for the train trip with Susie. That means a couple of slow-to-deflate Mylar balloons have been bobbing around the house for almost 2 months now. I'll tell you, you don't know terror until you are going downstairs in the dark and meet one of these things floating quietly up the stairwell toward you.

And then there are the garlands Susie put up (also for Brian's birthday). They took so much work, we were loath to take them down; and then there WAS the graduation party, and 2 weeks later there was Susie's birthday. So we've been able to rationalize having crepe paper streamers dangling from our living room ceiling, in full view of the front entrance, for (again) almost 2 months. And guess what? My birthday is in 17 days, so I'm guessing these aren't coming down any time soon.


And, uh, yeah, that snowman is still there. 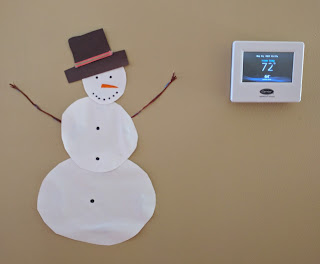 But, hey, my hall closet continues to look pretty good. The bag of plastic bags that sneaked in there has mysteriously disappeared - I don't remember removing it and I can't find it. Maybe Larry is messing with me. I wouldn't put it past him.

Speaking of Larry, I came back from yoga class to find he had laid out 2 (2!) birthday cards on the kitchen table, waiting for family members to sign them. One was for the kids' Uncle Fred and the other was for David. You have to understand, Larry and I have been TERRIBLE at sending timely birthday and other greeting cards for the past, oh, 26 years. I mean, it happens late or (most times) it just doesn't happen. It's a family trait on his side, so no one gets too mad at us, but still - we're not proud of it.

So when I came home on Saturday and found these cards ready to be signed over a WEEK EARLY, I was stunned. "Hey, Larry," I said, when I saw him later. "That's amazing -  we're sending birthday cards to people on time. That's really great!"

He just looked at me.

"I bought those last year," he said, "and I forgot to send them."

Like I've said before, we're a match made in heaven.