Cool As A Cucumber

Now, I know I've written about my refrigerator (many times) before, all about the mess and the strange things I find there and the over-proliferation of condiment containers. But,seriously, ever since November, when the French door fridge with the bottom freezer (that I have been lusting after for years) entered my life, I've been making a real effort to keep this appliance and the situation therein under control.

So, with my trusty compost bucket handy, I've (mostly) been managing to get rid of rotting produce and moldering leftovers weekly. I've also been waging a (mostly unsuccessful) battle to keep the fridge organized, so that food items don't get shoved to the back and wasted.

It's my life's work, people. Respect it.

What with all this dedication and effort, imagine my surprise this morning to find the item pictured below in my refrigerator, in the plastic bin reserved for salsa and mustard jars (yes, they do have their own section, shut up): 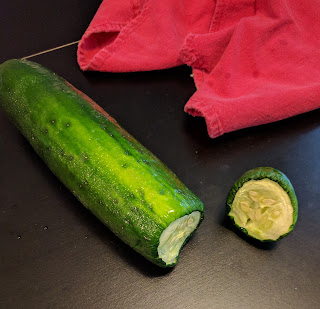 That is, to my professional eye, neither salsa nor mustard; it is, in fact, a cucumber with its end broken off yet lovingly preserved. Now, can you think of a reason for this? I mean, it's not as if someone had started to open a cucumber and then decided they didn't want it but couldn't fit the lid back on, right?

Actually, maybe that was it. I don't know. So I turned to the possible culprits, some of whom happened to be standing in the kitchen at the time. "WHAT IS THIS?" I said, waving the two parts of the cucumber in the air in a threatening manner.

"It's a cucumber," Rachel said. Gosh, I always knew she was the bright one.

"Why is it like this? Who would DO this?" Hey, I wasn't letting this go.

"Um," Larry spoke up from where he was sitting at the table. "That was me."

I stared at him, trying to figure out why a grown man would try to open a cucumber this way.

"So, why didn't you peel it and eat it rather than letting it go bad?" I demanded, because I'm shrewish in the mornings, apparently.

Now, let's give Larry some credit here. He didn't bother to point out that I have probably let more food go bad than has anyone else in the entire history of the world. He didn't pull up all the pictures on this blog featuring spoiled produce. He didn't even walk over to the compost bin and point out the brown, slimy celery I dumped in there yesterday.

Can't argue with that...