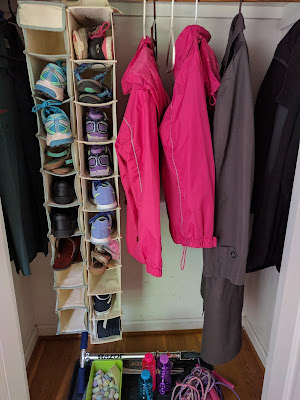 5 days, people - my closet has maintained a pristine state for 5 DAYS. This may be an all-time record for us. As you can see in that picture to the left (or right, I mix them up, and no, I would never be able to learn to drive in Great Britain), a few more outdoor toys have sneaked in (some jumpropes, bottles of bubbles); but they are all being neatly contained by that rectangular doo-hickey thingamabob that I picked up in IKEA at some point.

I'm feeling pretty good about myself right now, I'll tell you that. Add to that the fact that I actually went out and weeded the front yard and pulled out the ground cover that was threatening to choke some bush Larry planted there, and I'm practically a candidate for the Housekeeper of the Year Award.

Does that exist? I wouldn't know.

Today I get to wait around for Larry's kayak to be delivered. People, that man has been pining for one of these things for years; and he just managed to sell the rarely used canoe that he bought, oh, 17 years ago, so I'm certainly not going to be standing in the way of his dreams. Considering that we don't have a garage, however, I am not quite sure where I will stick this thing until he gets back from his business trip.

San Diego - the man is in San Diego for a week. And he didn't have to sleep sitting up on a train and eat granola bars for 4 days to get there, either.

Gosh, I wish I had a career.

ANYWAY, I get to sign for the kayak delivery. I also get to sign for Theo's personal goods shipment on Friday, because HE's off in Dublin, climbing the Cliffs of Moher or something before he heads off to the rest of Europe. He's definitely earned this trip, after 4 years in the Army; but that doesn't make me any less jealous, I must say. But, really, I'm too old to be staying in hostels all over the continent - I learned that in Seattle.

No, I'll just have to wait until we strike it rich and Larry retires and we can pay for a river cruise or however else it is that well-off senior citizens tour Europe. I mean, if Larry isn't off kayaking in Costa Rica or some such place.

I don't know why I picked Costa Rica. I know nothing about it, actually. Do people like to kayak there?