Aldi find of the week: nice graduation cards for only 99 cents! 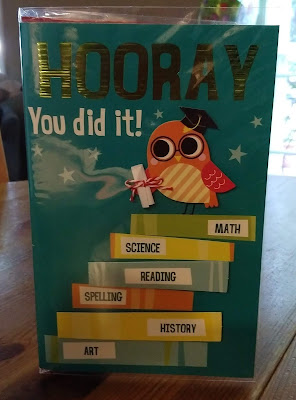 Sure wish I had figured that out before I dropped a zillion bucks on the ones I had to buy on Saturday, on the way to multiple grad parties. All right, not a zillion.  More like 5 bucks each, okay?

That card is for our neighbor's daughter, and I was all set to buy her an Amazon gift card like I had bought for Brian's other friends. Great idea, right? They can use it at college to buy whatever they want. Luckily, Susie was around to stop me. "Her family doesn't LIKE Amazon," she said.

Not like Amazon? I wondered. "What are you talking about?" I asked Susie.

"Mommy, of course they don't like Amazon!" she said. And then it dawned on me: yeah, the neighbors might have a beef with that particular corporation, seeing as how they own an independent bookstore. When did my baby get so smart, anyway?

In an unwonted burst of domesticity after my Aldi trip on Monday, I made my family an honest-to-goodness frittata. It had spinach and everything. Healthy!


Look at me being all Pinterest-y, won't you? I hardly know myself.

On Wednesday Susie and I went strawberry picking with friends. I skipped doing it last year and we actually ran out of jam, what with using the jars from years previous for everything from teacher gifts to Christmas presents. So yesterday turned into a strawberry extravaganza, mostly because I thought I needed two full flats of strawberries when I only needed one.

We got a LOT of strawberries, is what I'm saying.

Turns out those metal strawberry hullers that I saved in my junk drawer for I don't know how many years aren't all that efficient. What saved us is this one neat trick (seriously!) that I saw on a Facebook video. It involves poking a straw through the bottom of the strawberry and up through the stem.


It really worked. Have I mentioned that I love the internet?

So I labored for 2 1/2 hours (with some help from Susie - she liked the straw trick) and wound up with about 8 pints of jam. I managed to jam (pun not intended) the other flat of strawberries in the fridge until such time as I could bear to face it again.


That time wasn't today, though, because today Larry and I attended a funeral at Arlington (for the friend whose sudden death last December taught us that Larry could probably manage just fine without me, remember?) Despite the fact that we have had over 5 months to get used to the fact that our friend is gone, today was devastating. Oh, the ceremony was lovely, and taps just about broke my heart, and they did this lovely thing at the end where we all laid special flowers from Hawaii on the coffin. But then I got to go hug my widowed friend, whom I hadn't seen in several years - my friend who is exactly my age, who I've known for almost a quarter of a century, who was a youngish military spouse with me - and I pretty much lost it.

"I have to die first," I announced to Larry as we walked back to our car. "I'm not going through what she went through today."

You know, I don't know why that man always looks so confused.