Who's slacking? Could it be me? I'd like to say I didn't post this weekend because I was too busy cleaning the house; but, looking around me here, I'd have to say that couldn't be true. The past 2 days went by so fast, I don't even know what happened to them.

I know I didn't spend them buying a phone battery at Target, because our house phone is still running out of charge after each 4.8 seconds of use. If you call me, talk fast. And if you called and left a message? Forget it.

And wouldn't you know, it's Thanksgiving on Thursday! Maybe I should find a turkey somewhere. Although, really, the kids should be perfectly happy with just corn, right? Corn and pie. Harris Teeter has pies on sale.

There! That's taken care of. I'm nothing if not efficient.

Efficient and unrealistic...I decided our family needed to do something different today, something fun that would provide our children with fond memories of parents who were willing to abandon the drag of the daily routine and hop in the minivan in search of adventure. Have potty seat, will travel - that's us!

So we trekked almost an hour away to see a friend's son perform in The Music Man. Music! Dancing! Skittles at Intermission! The young'uns were enthralled. Then, as if that weren't adventure enough, we went back to the friend's house for dinner. Just like normal people who aren't totally overwhelmed by the day-to-day requirements of living with children! Of course, now we're exhausted; apparently Larry and I are too old to have fun anymore.

By the way, our friends had a Wii. This was exciting, because my kids had never seen one.

Anyway, I had no idea you just plug the Wii into a TV to make it work. I thought it would be way more complicated than that. As in, input cables and ethernet cables and special electronic boxes and all that... 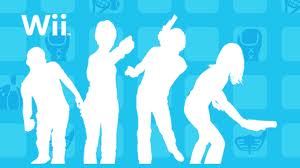 So the children were enthralled, and I was grateful that we adults were allowed to talk in peace. But, folks? You know, you folks who say that the Wii is good exercise for the kids? Get out of town. Every time I looked towards the den, I'd see my kids standing in front of the TV (hey, at least they were standing - is that what y'all are raving about?) and sort of waving their forearms around in the air. It looked very abnormal and not at all strenuous.

I'm thinking that we've lowered the bar on our definition of exercise these days.