Yes, I did have a great birthday - thank you for asking. I'm sure that the folks working in the T-Mobile store and at the Apple emporium didn't have too good a time, though, what with Miss Neanderthal here spending a few hours pestering them with questions about s 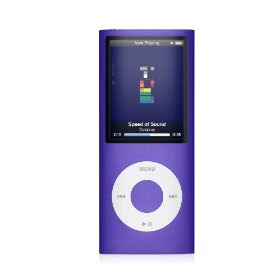 mart phones and contract costs and "how do you work this thing anyway?"-type inquiries.

That's what I did with my glorious free time - I researched how best to catch up with the rest of the world, technologically speaking. I learned enough to realize that Larry and I can't afford smartphones or even an IPad. So I moved right on to IPods, admiring all the fun colors of the Nano and marveling at the Internet connectivity of the IPod Touch. In fact, I was fondling the cheapest IPod Touch (the 8-GB model) and reminding myself that, no, I didn't need it and that I could be perfectly happy with a purple Nano when a gentleman and his preteen son walked up to the display table.

Good man, I thought approvingly. What does a young kid need with an expensive device like this?

And then he told the boy, "You'll have to settle for the 8-GB one." 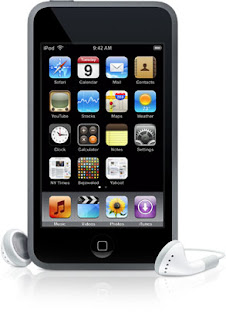 de my 47-year-old self snapped. My father had told me to pick out something nice for my birthday. Would he wish to be bested by some dope who was willing to spend 200 bucks on a toy for a prepubescent boy? I think not.

Reader, I bought it. And then I went home and spent 4 hours attempting to sync it up to ITunes on my computer. I gave up twice, but - somewhere past midnight - this 47-year-old dinosaur emerged victorious. I had Apps; I had music (okay, one song, but it's a start); I had, in a word, success.

It was a good day.