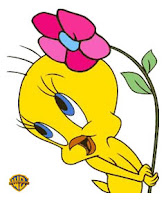 Judging from my blog stats, I'm attempting to entertain a mass of strangers who are here only because they were doing a Google Image search.  Everyone, everywhere, needs pictures of Tweety Bird.  Also?  Yosemite Sam.

When David was 2, he looked like Tweety Bird.  He had this big round head and skinny body, and he had the same speech defect going on ("tat" for "cat") AND he was very attached to a stuffed Tweety Bird that someone had given us.  Weird coincidence, that.

Well, now he is 14 and doesn't look like Tweety Bird (much) and is way taller than me and managed to sprain his ankle on Sunday.  Usually, David does everything for himself - laundry, cooking, homework, whatever.  And now, suddenly, he can't. Which infirmity has made me realize that it is a good thing my older kids are somewhat independent, as I have no idea whatsoever how to take care of someone bigger than me.  Actually, I have no idea how to take care of anyone older than 5, say, short of throwing some food at them and making them go to bed by a certain hour.

So, deciding to make this a community-service opportunity for his younger siblings, I delegated David's laundry to Brian.  I made Susie his official water-cup carrier.  I've tasked Rachel with trying to keep the floor clear so that David doesn't break a leg while maneuvering his sprained ankle around on crutches.  And I'm off the hook.  Because it just feels downright weird to be pouring water for my 14-year-old.