If I had extra cash lying around (which I don't, as we just blew it all on a pop-up camper), I would hire someone to come in and figure out how to light our living areas in such a fashion that I no longer feel as if I'm going blind every time I sit down to knit.  Maybe that person would even be able to explain to me how any lamp can survive unscathed in a household with children in it.  Our lamps all have shades hanging askew, messed up cords, stupid switches that don't work unless you turn them exactly right - all from being knocked over one too many times. 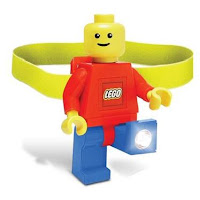 But you know what would be cheaper than a personal lighting designer?  If each of us just wore a hat with a headlamp on it.  Wouldn't that make more sense?  Light where you need it, every time!  No fragile lamps, no ceiling fixtures with breakable parts...just some simple headgear that we would put on first thing in the morning and take off when we go to bed at night.  Sort of like tefillin, only not sacred...

I Googled images of tefillin, so you would understand that they are prayer phylacteries , traditionally worn by Jewish men during prayer services, and I stumbled on this: