A Crotchety Plea For Old-Fashioned Play 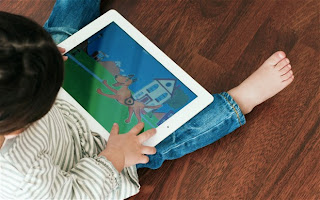 Further evidence that the world is going to heck in a handbasket - toddlers addicted to electronic devices.  Do I even need to comment on this?  Do you realize that, when I first started raising my kids over 21 years ago, all I had to worry about was keeping them from watching too much TV?  This was an extraordinarily easy proposition, considering that we couldn't afford cable and that our TV at the time was a 13-inch hand-me-down with a fuzzy screen.

Now?  I still have young-ish kids, and attempting to keep them mostly screen-free is becoming a somewhat quixotic quest, one that -- at times -- almost makes me weep.  Their friends come over with the Internet in their pockets.  I have to confiscate smartphones and similar devices at the door.  (Yes, I'm THAT mom.)  Of course, at their friends' houses, there are probably different rules.  I have to trust that the parents at least restrict the kids to somewhat harmless content.

But it isn't really the content so much that bothers me.  It's the activity (or lack thereof) itself.  It's not the screen time, per se, but what screen time replaces.  Remember Legos?  Board games?  Cards?  Jump rope?  Any of those activities are healthier for a developing brain than gazing at a screen, no matter how clever or complex the game displayed thereon might be.

You see, staring at a screen makes the child a consumer, not a creator.  I've watched my kids playing, and I'm not impressed with what I see.  The child behaves like a sophisticated sort of lab rat, trained to push the right levers to get its rewards.  The body posture, the focus on the screen, the jerky movements, the constant pushing to the next level - NOT NORMAL.  These games, fun as they might be, are only poor 21st-century substitutes for real play.

Real play - does anyone even know what that is, anymore?