Most Emphatically NOT April Fools

I hate April Fools Day. But I have discussed that at length already, here and here and here. So we are just going to pretend it isn't happening this year.

In other positively scintillating news, I am sick with a stupid, stupid cold. It started on Wednesday, and all day I kept thinking, "It's not so bad. I'll drink orange juice. I'll kick this to the curb, no problem." By last night, though? I thought I was going to die.

Incidentally, it takes less than 48 hours for my house to fall apart around me. I can't even imagine what this place will look like when Susie and I return from our 2-week train trip. I picture the other family members wandering aimlessly through a trash-strewn house, foraging for food in a refrigerator filled with moldy leftovers. It will be like the Walking Dead, only messier.

You know what's fun about being a mom? Cleaning the bathroom when you're suffering with the cold from hell, because no one else even notices the dirt and you're too sick to order them around. Gosh, I LOVE being needed.

But, hey, right before I came down with the plague, I did manage to make those project bags out of the napkins I bought at World Market. Here are some really bad pictures I took at Knit Night, because I was giving them away and realized I didn't have a photo of them yet. 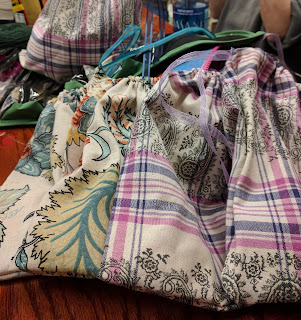 It's hard to see, but Susie and I bought fun-colored ribbons to make the drawstring at the top. I am, in a word, dumbfounded that I actually followed through on a project idea. Who knows? Maybe next month I'll finally get around to completing the braided rug that has been languishing on the rug loom I bought at Rhinebeck 1 1/2 years ago. Stranger things have happened. 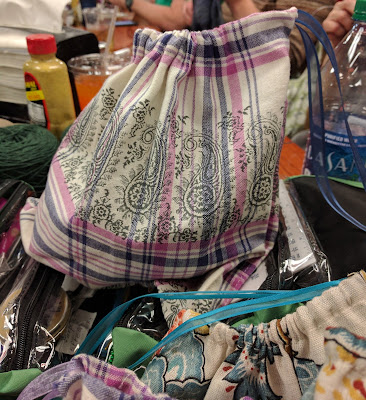 I think the mustard and the orange soda set off that bag nicely, don't you? They give it a certain je ne sais quoi. Such a shame I never pursued that career in photography....