Regular readers know that I have a small issue with overdue library books and late fines; nothing I can't handle, just a bad habit that costs me 10-15 dollars a month. I'm okay with that. 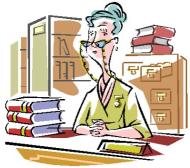 And I knew I was facing a hefty fine today, as Christmas and New Year's had both landed on my regular library day this year (are they always exactly a week apart?).  I expected to pay as much as 30 or even 35 dollars, like I did the year we were all sick and couldn't make it to the library for a month.

But folks, today's fine was in the triple digits. I thought I'd die. To make matters worse, I hadn't gone to my usual branch (where someone may have pitied me and erased half of it).  No! I went elsewhere and got the strict German-lady librarian, who looked as if she wanted to fingerprint me. And then take my children away, so that they wouldn't have to be raised by a criminal.

It was a lot of money.

I didn't even have the comfort of coming home and treating myself to some chocolate, because I had finally dragged myself back to Weight Watchers today. Some of you may recall my boasting about reaching my goal weight, way back in April of 2006. Yup, I was pretty proud of myself. 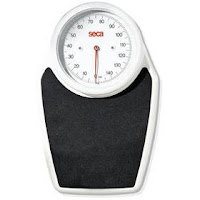 Well, let's not live in the past, okay? I walked up to the receptionist and said, "I haven't been here in a year and you have to promise not to say anything critical when I step on that scale." Because if she did, I knew I would cry. Fortunately, she was a nice person who had apparently dealt with similar situations. And who took 40 dollars from me, because I was over my goal weight. Just add that to my tab today. I'm trying to spend money faster than Larry can earn it, is all.

The good news was that my weight, while way up, was still 5 pounds less than what I had thought it would be - so I feel as though I lost 5 pounds today (after only one day of dieting! Cool!) Isn't Weight Watchers great?

In other news, we managed to get rid of our gingerbread house village today, despite David's best efforts to hang on to his little creation forever. I had to stuff it in an opaque garbage bag when he wasn't looking, and then I ran out to the garbage cans and threw it in. I felt like a murderer, disposing of a dismembered corpse. 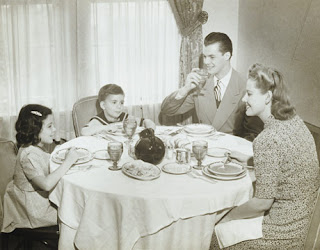 Oh, and I seem to have struck a nerve with my last post - apparently, many women out there hate dinnertime with kids. I'm all for starting a new cultural trend to feed the kids early and put them to bed, much as they did in Victorian-era England. Larry and I never have been able to understand all those experts who claim that eating dinner together is a healthy family activity. We strongly suspect that they don't have any children.

Okay, I need to get back to dealing with a bunch of small people suffering candy-cane hangovers. It's not a pretty sight.