That's how I feel, anyway, after spending 4 months trying to clear my account at my local diabolical library. Today I was able to walk in there with my head held high and check out books on my own - no need to be debriefed by the librarian about which items are still missing and how many overdue fines I still need to pay. My account wasn't "blocked," my fine was at an acceptable level (you didn't think I would have nothing to pay whatsoever, did you?), and no one looked at me as though they wanted fingerprints.

If our country ever turns into a police state, I swear, those librarians will be the first on board. Don't mess with 'em.

2 years ago, it seemed to me to be a good idea to rent an organic community garden plot down the road from our house. You can read about that here. Although we have had 2 relatively unsuccessful growing seasons (for which we pay 48 dollars each), hope springs eternal in my plant-killing breast; so I insisted that Larry cough up the cash yet again this year for our rather unproductive piece of earth. Being a wise man, he complied; he knows better than to try to confront me with reality.

I didn't manage to get out there in February, as I had planned, and clear out all the dead weeds before they sprang to life again; after all, it is an entire half mile down the road. So, when the children and I arrived at the plot in late April, we were greeted by a scene reminiscent, say, of an Amazonian jungle. I'm surprised there weren't monkeys swinging from weedtop to weedtop. After some effort, we were able to locate the approximate locations of the 6 planting boxes my husband had so lovingly installed for me back in 2006; and we proceeded to hack our way through the undergrowth (where is a machete when you need one, anyway?) in order to clear some space for planting. No poison allowed, remember - these are organic plots.

So now, after several sessions of weed pulling and soil-turning, we have 2 (count them, 2) 4x4 boxes cleared of weeds, surrounded by a sea of unwanted (but organic) vegetation (including a couple of small trees). The compost pile is in there somewhere. I had a picture to show you, but now Blogger isn't letting me upload any more images. I'll try to add it later. 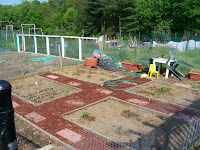 This is not our plot. It is one of the gardens near ours. They are all, apparently, green-thumb overachievers. And we are the white trash of the community garden plot world.

I wish I could show you the other pictures. One garden has a grape arbor in it. Another has a small pond and cute little figurines. Ours has a trash bag, some old windows I dreamed of making into a cold frame, and a forgotten bag of topsoil. And the weeds, of course. Our gardening neighbors must hate us. In an eco-friendly way, of course...
on May 06, 2008