Larry has had a lingering, flu-like illness for over 2 weeks. Since yesterday, every time he blows his nose or coughs, he adds a few pig-like oinks or snorts. The kids love it. "Swine Flu!" they yell.

I wonder whether his fellow airline passengers this evening will find that routine funny?

Because, yes, Larry is leaving me again. But only for a few days! He has to come home and pack for the 2-week trip he's taking (lucky for him) after Mother's Day.

Mother's Day? I won't want much. How about a fountain coke (with ice!) and someone (Larry) to clean the rotting apples out of my second refrigerator? I'm easy.

You see, I've given up Coke. I was drinking more and more of it, until I w

as considering filling one of those Camelbak things with the substance and wearing it on my back with the straw in my mouth. So I quit cold turkey. I'll have one on Mother's Day. Another one on my birthday. After that? I'll probably slowly get addicted again. So it goes...

The temps this weekend went from early spring to full summer, a situation which made me realize that my summer clothes barely fit. So I dragged my sorry (big) a** back to Weight Watchers and stepped on the scale. It wasn't as bad as I thought it would be, so you would think that the person weighing me in would have mentioned that? Would have said something like, "Oh, you don't have too far to go?" No. She said, "Well, it's a good thing you came back in." Making me think I had gained 20 pounds. I got back in the car without even looking at the number she had written down and cried. Thanks a lot, lady!

Turns out it was less than 10. It's just all sitting right on my middle.

You know, losing weight (and keeping it off) would be easy if I weren't feeding children all the time. I think I eat a day's worth of WW points just sampling stuff that I am cooking (for them!) and clearing their plates after meals. That's right - I blame my kids.

Trip to my parents? Oh, yes. Fairly uneventful after a late start caused by the fact that we couldn't get the seating arrangements set to everyone's satisfaction and seatbelt requirements. The tie-dyed cake idea went okay, but it tasted like Playdough to me. Probably because it was colored like Playdough. The kids liked it. Apparently someone else liked it, because it was vandalized 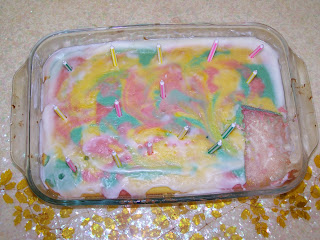 before we could sing Happy Birthday to my parents. You would think that the unlit candles would have tipped off the perpetrator to the fact that the cake should not be cut yet. And Uncle Matt is still insulted that he was accused of this dastardly deed. By both Theo and Anna...and, um, me....

You see, we were wrong. It was Grandma. She didn't feel like waiting. And, you know what? When you're 78, carpe cakem may just be a good philosophy to live by.
on April 27, 2009