Pee Is Thicker Than Water

Uncle Matt came down to spend Brian's birthday and Easter with us. As we have discussed before, Uncle Matt leads a somewhat sheltered life, a life unbuffeted by the unpredictable demands of child rearing. But not to worry! Susie quickly inducted him into our special brand of chaos by peeing on him.

That'll teach him to hold his cute little nieces and nephews, won't it?

Larry and I added insult to injury by making light of the whole incident - "That's all right," I joked to the kids, while their uncle was downstairs changing his shirt, "Uncle Matt is absorbent!" Oh, we were the picture of nonchalant, seasoned parents, I'll tell you.

"But Mommy," Rachel said, "there's some pee on the couch, too." Immediately irate, Larry and I shouted (in unison), "What?! Where?!"

I don't know why, but the bemused look that appeared on Theo's face - a look recognizing that his parents were worried more about the furniture than about his uncle - killed me. As in, I doubled over - literally - with laughter. I screamed with laughter. My stomach hurt and tears rolled down my face as I lay on the floor and pounded it with my fists, begging someone, anyone, to help me stop laughing. I thought I would pass out for lack of air.

The children? They looked a tad frightened. And I'm not sure Uncle Matt knew what to make of it, either. But, you know what? Laughter is the best medicine. I haven't felt that good in a long time.

We had what we thought was a marvelously simple idea for Brian's birthday cake: make it look like a Lego piece by positioning six cupcakes on top of a rectangular cake and frosting all of it the same color. Alas, the best-laid plans of mice and men gang aft agley. While we thought we would end up with this:

we instead ended up with this: 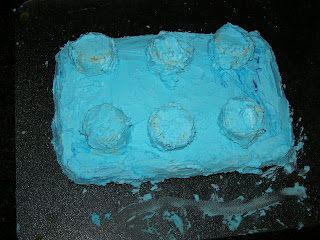 I know - it is a talent of mine, isn't it? The cake looked as if it were gnawed at by rats. Yum! Brian was blessedly resigned over our failure. "That's okay," he said. "Next year, we can do the volcano cake again."

Over my dead body...