Theo is sick today, so we all donned surgical masks and threw incense at him. I would have bought hand sanitizer but (no joke) the local Harris Teeter is sold out. Panic much?

Larry is still away, which explains why I haven't been able to blog. Seems that there are a lot of little things Larry does around here that free up some me-time for yours truly. Who knew? I would thank him when he gets back, but he's going away again. So the hell with that.

How about some fridge pictures? Maybe somewhere in that petrie dish I call a refrigerator there is some incipient cure for our latest could-be pandemic. Where are those people from the CDC when you need them?

Here's the picture I took on Monday, when I realized I couldn't wait until Wednesday. You see, the refrigerator replete with food-filled containers was making the kids think there was actually something they could eat in there; and I hated hearing them cry when they took off the lids and found out the awful truth. So I cleaned out early. 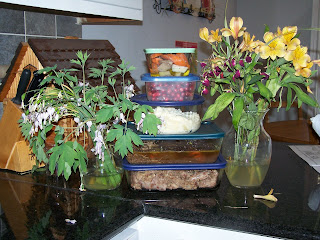 Pretty, isn't it, flanked by those vases of dead flowers? Gives it a sort of eco-friendly feel, don't you think? And, hey! We just had Earth Day!

Top to bottom:
But wait! There's more! Consider it the Swine Flu Bonus edition - here's what I cleaned out today, from the top (again): 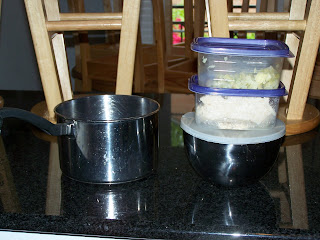 if it is clean; maybe it should be in the pots drawer under the stove instead? That would make sense to me. Anna, apparently, doesn't agree with that line of reasoning; so, whenever she washes a pot, she leaves it on the counter for the magic dishes fairy to come along and dry it and put it away.